Thank you for joining us today as we bring you Origins by Lyla Oweds! Book Synopsis:
The things I see aren’t for the faint of heart. And I am no longer willing to ignore them. Not even when my family, and my best friend, tell me to keep quiet about what’s happening. They say people will think I’m crazy. Maybe I am. But the spirit haunting my professor’s house is definitely trying to tell me something, and I’m the only one who can see it. The one person who can help me is my best friend's brother. But I don’t know if I can trust him or his friends. Or if I can step outside the protective bubble I’ve built around myself. At this point it’s a toss up: the ghosts will kill me or my panic attacks will. Either way, I figure I’m going to die.

And if you'd like to read more, check out the first three books in the series

gathered together here in Mu 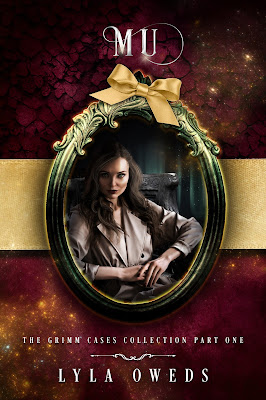 Books2Read ~ Amazon
A mate bond is stronger than any other force in the world.
At least, that's what they say.
But what Titus and I have is... unique. Especially as, even though we'd been reborn so many times, the dragon has never had a mate. No one knows what to expect.
Outside of that, everything with Damen, Julian, and Miles is not all fun and games. Things are different now, and while that's natural, I'm not entirely sure I'm ready to make that next level of commitment.
However, we might not have a choice.
When Titus's investigation ramps up, becoming entangled with my debut case, I've run out of all other options. The reality is, my usual methods of coping won't work anymore. But to live is to grow, and to change. Lyla Oweds is an Amazon bestselling paranormal romance and urban fantasy author who resides in the beautiful Pocono Mountains, Pennsylvania. She grew up near Gettysburg, Pennsylvania and is a native of Baltimore, Maryland, and has a deep appreciation for the paranormal, hauntings, and Edgar Allan Poe. As such, she loves all things fantasy, mystery, crime, and horror. When not reading, writing, or working as a web programmer, Lyla can be found doing adult-y things such as being a mom to small children, cleaning, and gardening. She also frequently enjoys makeup videos, massages, wine, and coffee.

WE ARE EXCITED TO BE SHARING HK JACOBS CONTEMPORARY ROMANCE, WILDE TYPE WITH YOU TODAY.

WILDE TYPE IS THE FIRST BOOK IN THE ALEX WILDE SERIES AND IS OUT NOW! "He had awoken something in her the first night they met--a rebirth of hope for irrevocable love, a love so powerful that it canceled out the burden of her pain."

Dr. Alexandra Wilde is brilliant, driven, and wholly dedicated to her profession.  Caring for critically ill children has taken her across the globe from Mongolia to Haiti to her current assignment in Gaborone, Botswana.  Her life is full of excitement, tragedy, and personal sacrifice with little room for anything or anyone else.  She has always welcomed any adventure…except for the one wearing the face of billionaire mining heir and international playboy, Ian Devall.  He is arrogant, charming, and utterly disenchanted.  However, when circumstances thrust him into her life, she is captivated by a glimpse of his deeper character and drawn into a blazing romance. An ensuing path of self-discovery leads her to reopen the wounds of her past, and she must choose between the life she always imagined…or one she never dreamed was possible. Hi everyone! I’m Katie. I am a fellow bookaholic, SAHM, who homeschools my kiddos. Malissa and I met many moons ago at a book event and bonded over our crazy lives.

I am so nervous about writing this review because I haven’t done any writing since HIGH SCHOOL! I actually spent more time than I care to admit googling “how to write a book review…”

I had the pleasure of reading Wilde Type by HK Jacobs. This is honestly the first book that I have read in the last year that wasn’t a reread. COVID was… a thing…. that I am happy to finally move past.  But I need to acknowledge that over the last year I could only read books that wrapped me up like a warm hug and I didn’t want to try anything new in fear of rejection.

Wilde Type centers around Alex Wilde and her finishing up her last year of med school. She is a doctor in Botswana when the story begins. She is tired after a long day of saving kids at the local hospital when her friend Rox (think Jessica Rabbit) walks in. Rox says they need to play “the game” to cheer Alex up. (Little do they both know how much their game will change both of their lives that night) Alex meets Ian (the typical rich playboy) who stirs up feelings inside of herself that she has never felt before, and she never thinks she will again. She just puts them on a back burner and goes back to work at the hospital to prepare for a big pitch to secure a grant for the hospital. While greeting the team of the grant committee her dream guy walks in, Ian is the CEO of the foundation! She thinks he’s ignoring her or forgot her from the other night and is just the typical pretty rich boy who is so obsessed with his phone and cares more about the newest car or the next pretty girl he can get with. After the presentation, she invites Ian to see what she really is passionate about and to come with her to one of the villages the next day. At first, he looks like he will be a no-show, but he shows up right before she drives off to the village.

Without giving away ALL the details of the story, Wilde Type is all about Alex discovering who she is and becoming who she is meant to be. She is a bad @$$ woman who wants to save the children of the world and even a building falling on her won’t stop her. Ian grows and heals throughout the story and as they say, opposites do really attract, and sometimes it is a magnificent love story.

I loved how Alex was a real, genuinely good person who wanted to help those less fortunate.  I felt like the medical talk was easy to follow, so even if you don't have medical knowledge you don't get bogged down in the story. And being a Philly girl, I loved her talking about the local spots.

Something Alex says in the story that meant a lot to me and the monsters in my own closet really stood out: “You made me feel worthless - like I wasn’t worth loving. Every great thing I have ever done is in spite of you. … You have influenced all of my choices - the good and the bad - but I won’t give you that power anymore. I choose to forgive you. I choose to forget you. And I choose me and my life… without your dark shadow hanging over it.”

We all have monsters in our lives, we need to be bigger, braver, and stronger than them.

Part 2 of Lex and Ian’s love story will be coming out this summer! I definitely plan on reading it! Excerpt:
Reclined in the corner armchair, she had heard the front door close, followed by heavy steps on the stairs before his face appeared in the doorway. An entire plotline happened across his features—consternation, disbelief, the dawn of realization, and unadulterated elation. Ian had said nothing, with words at least. He simply walked into the middle of the room and stared longingly at her bare legs and his white dress shirt barely covering her torso. She watched the flames ignite for a split second before his arms scooped her out of the chair. Her bare legs wound around his waist, and he kissed her as if the world was literally ending.

Alex swept the room, her gaze parallel to the floor, observing the carnage of their discarded garments, specifically her red underwear that had been ripped in half at some point, possibly with Ian’s upper incisors. They had oscillated between murmuring quietly to each other and making love not so quietly until the streetlights outside snapped off in anticipation of the day to come.

Strong fingers traced her vertebrae, fingers that had explored every section of her body last night in glorious detail.


“Don’t move,” Ian whispered, and she felt the bed creak as he pushed up to a sitting position.

“What are you doing over there?”

“Imprinting this visual in my memory for all eternity,” he said simply.

“What?” she flipped her head around and saw that he was reclined on a pile of fluffy white pillows, eyes narrowed but notably wanton and naked except for the flannel sheet barely covering his manhood.

“You,” he breathed, extending one hand to brush the hair from her face, “are the most beautiful creature I’ve ever seen.”

Alex said nothing, unwilling to break the trance-like bubble shimmering in the air around them.

He rubbed his thumb over her bottom lip. She opened her mouth and bit his thumb playfully.

“I’m pretty sure mine does.”

They laughed, and suddenly she wasn’t near close enough to him. She sat up quickly and used her momentum to pounce on top of him like a lioness, draping the sheet over herself like a hooded cape. She was a nanosecond from kissing him when a violent knock on the front door caused the magical bubble to make a nearly audible pop.
ABOUT HK JACOBS: HK Jacobs graduated from Baylor College of Medicine and has spent her life as a physician traveling the globe caring for children.  She also has a Master of Public Health from the University of Texas with a concentration in global health and completed her thesis in Port au Prince, Haiti.  She currently resides in Texas, where she practices pediatric critical care medicine and strives to live the life she imagined.  Wilde Type is her debut novel.
CONNECT WITH THE AUTHOR:
Website ~ Facebook ~ Instagram ~ Twitter ~ GoodReads ~ Pinterest