A Huge thank you goes out to Jennifer L. Armentrout and her favorite shelf tweet last week.  Because of it I became entranced with Jay Crownover's Marked Men series.  Like seriously entranced, I read all three current books in three days,  my family was lucky to eat.  As I told another reader just this Friday, once I had those boys in my hands I could not put them down!

So who are the Marked Men?
We have the Archer brothers, Rule and Rome
The rocker, Jet
Their best friends, Nash and Rowdy
and one puzzle of a brother, Asa

Nash, Rowdy and Asa's books have yet to be released and while I CAN  NOT  WAIT for them, the focus here will be on the three current released books, Rule, Jet, and Rome!  Also, because I am going to go into all three books at once, I am not going to go in depth with each one, rather I would like to explain what it is about these men, their lives and their loves, that makes you want to devour them...the books I mean! Shaw Landon loved Rule Archer from the moment she laid eyes on him. Rule is everything a straight--A pre-med student like Shaw shouldn’t want--and the only person she’s never tried to please. She isn’t afraid of his scary piercings and tattoos or his wild attitude. Though she knows that Rule is wrong for her, her heart just won’t listen.

To a rebel like Rule Archer, Shaw Landon is a stuck-up, perfect princess-and his dead twin brother’s girl. She lives by other people’s rules; he makes his own. He doesn’t have time for a good girl like Shaw-even if she’s the only one who can see the person he truly is.

But a short skirt, too many birthday cocktails, and spilled secrets lead to a night neither can forget. Now, Shaw and Rule have to figure out how a girl like her and a guy like him are supposed to be together without destroying their love . . . or each other.

Rule is the epitome of bad boy.  He lives his life the way he wants to live it and he's not going to take anything off of anyone, not even his family.  But, the thing about Rule is...deep down hes lonely.  Deep down he wants to be a better man, but he's had no one to be better for until he is able to admit his love for Shaw!

Shaw is Rule's nemesis.  She's always there trying to get him to do the right thing, the proper thing.  In his eyes she's always judging which leaves him blind to the fact that she has loved him since childhood.  Shaw is an amazing heroine, (actually all of Jay's girls are.)  she's all the things we would want to see ourselves as being in her situation. Kind, thoughtful, caring, hard working, patient, (OH so patient) loving, and most importantly forgiving!

Rule Archer is a jerk, he's such a jerk that in the beginning of the book I want to smack both him and Shaw upside the head for their foolishness.  Then things come to light and you learn that nothing is what it seems for these two.  Everything Rule ever believed about Shaw was skewed by the love of his deceased twin and the memories he refused to let go or to see past.  In the end is Rule still a jerk, yeah....that is something that will change, but darned if he is not the most lovable jerk , one that I will have a soft spot for forever. 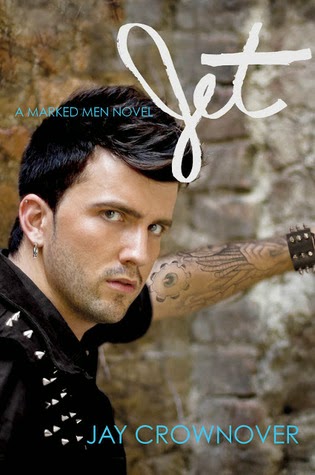 
With his tight leather pants and a sharp edge that makes him dangerous, Jet Keller is every girl’s rock and roll fantasy. But Ayden Cross is done walking on the wild side with bad boys. She doesn’t want to give in to the heat she sees in Jet’s dark, haunted eyes. She’s afraid of getting burned from the sparks of their spontaneous combustion, even as his touch sets her on fire.

Jet can’t resist the Southern Belle with mile-long legs in cowboy boots who defies his every expectation. Yet the closer he feels to Ayden, the less he seems to know her. While he’s tempted to get under her skin and undo her in every way, he knows firsthand what happens to two people with very different ideas about relationships.

Will the blaze burn into an enduring love. . . or will it consume their dreams and turn them to ashes?

Jet and Ayden, what can I say about these two?  I swear they both must have doctorates in Chemistry because Wow! (what too corny?)   I will say that of the three couples these two frustrated me the most.  I wanted to push them into a dark closet and leave them there until they came out madly in love, both hands raised, showing me tens all around *wink*.

Jay is the rocker who really doesn't want to be...not on a large scale anyway.  His ambitions silently run much deeper.  He's the boy who isn't sure if he is really one of the gang and he's the boy that knows deep down Ayden is his kryptonite.

Ayden, is a girl with an Amazon sized past from a little town in Kentucky who moves to Colorado with the 'help' of a school teacher.  Her goal in life was to better her life, to escape her past, not fall in love with a rock boy who doesn't (seemingly) have the stable future she craves!

While I did not love these two, (and really I think that came down to Ayden for me...she just ran to easily in my opinion,I know, I know...but still!) I still believe this was another success for Jay Crownover.  I may not have loved them as much as Rule and Shaw, but I still think they are a great couple and go through an amazing journey together. 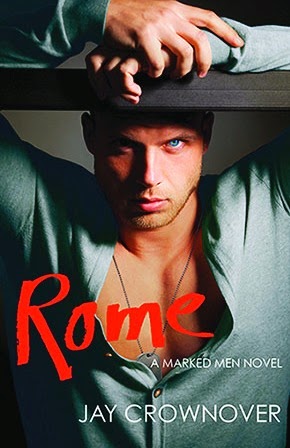 Sometimes the wrong choice can be just right . . .

Fun and fearless, Cora Lewis knows how to keep her tattooed "bad boy" friends at the Marked in line. But beneath all that flash and sass is a broken heart. Cora won't let herself get burned again. She's waiting to fall in love with the perfect man—a baggage-free, drama-free guy ready for commitment. Then she meets Rome Archer.

Rome Archer is as far from perfect as a man can be. He's stubborn, rigid, and bossy. And he's returned from his final tour of duty more than a little broken. Rome's used to filling many roles: big brother, doting son, supersoldier—but none of those fit anymore. Now he's just a man trying to figure out what to do with the rest of his life while keeping the dark demons of war and loss at bay. He would have been glad to suffer through it alone, until Cora comes sweeping into his life and becomes a blinding flash of color in a sea of gray.Perfect may not be in the cards, but perfectly imperfect could just last forever . . .

Rome and Cora!  Oh these two.  Out of all three books this one is by far the sweetest.  Rome and Cora are simply a beautiful couple and I adore them.  It is not the fast paced, high intensity, sexcapade of the other two books, but I think there is a reason for that.  Rome and Cora have a few years on the rest of the gang.  Both have already been through heart ache and had their defining moments.  These two while they make plenty of mistakes are not prone to the follies and whims of youth.

Rome, an ex-Army Staff Sergeant who has lived through his share of tragedy between his 10 years of service and the death of his and Rule's brother.  He is thrust back into civilian society trying to figure out where he fits in and dealing (poorly) with the effects of PTSD.  The one thing he never expects is to find love when he can't even love himself.

Cora, a witty, spirited momma bear.  The Marked Tattoo shop manager and resident piercer, she is the one who has taken care of these 'Marked Men', keeping them in line and doling out advice, even when not requested.  She's been broken by an old flame and is looking for a perfection that she will never find as long as her heart is closed to the perfection to be found in imperfection.

Rome stole my heart, there is just something about him that makes you want to wrap him up in your arms and hold him until everything is all better.  Jay draws a realistic picture of life after the Army and the consequences that can come along with it.

In the end what makes these books worth reading is that Jay Crownover simply knows how to write them.  She knows how to pull the reader in and how to keep you there rooting for the characters and falling for each of them.  She writes these stories in such a realistic fashion that you just can't help but want to mother them, slap them, or love them depending on the page.  She lays it all out there straight.  There are no subtleties or niceness.  It can be gritty, emotional and angering.  What it is is truthful.  While I may not agree with all the choices made, I can easily see how the choices were made and how those choices affect the lives of each person in the story.  These books are what they are and Jay makes no excuses for her boys or for the girls that love them!

Nash releases April 29th 2014!
Here's where to get RULE and don't forget to get them all and put them all on your TBR