So I don't know if you guys have heard of this or been following along with the  1001 Dark Nights Series, but I am loving it.  This is a series of Novellas that are being released monthly by authors you love and authors you are soon to love.  Here is a snippet explaining the concept to you.

Welcome to 1001 Dark Nights… a collection of novellas that are breathtakingly sexy and magically romantic. Some are paranormal, some are erotic. Each and every one is compelling and page turning.
Inspired by the exotic tales of The Arabian Nights, 1001 Dark Nights features New York Times and USA Today bestselling authors.
In the original, Scheherazade desperately attempts to entertain her husband, the King of Persia, with nightly stories so that he will postpone her execution.
In our versions, month after month, each of our fabulous authors puts a unique spin on the premise and creates a tale that a new Scheherazade tells long into the dark, dark night.


This month the novella is Wicked Wolf by Carrie Ann Ryan and I'm excited to share my review with you. 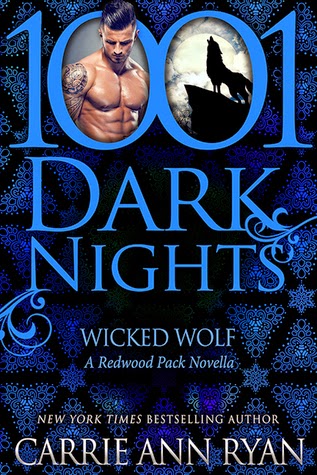 The war between the Redwood Pack and the Centrals is one of wolf legend. Gina Eaton lost both of her parents when a member of their Pack betrayed them. Adopted by the Alpha of the Pack as a child, Gina grew up within the royal family to become an enforcer and protector of her den. She’s always known fate can be a tricky and deceitful entity, but when she finds the one man that could be her mate, she might throw caution to the wind and follow the path set out for her, rather than forging one of her own.
Quinn Weston’s mate walked out on him five years ago, severing their bond in the most brutal fashion. She not only left him a shattered shadow of himself, but their newborn son as well. Now, as the lieutenant of the Talon Pack’s Alpha, he puts his whole being into two things: the safety of his Pack and his son.
When the two Alphas put Gina and Quinn together to find a way to ensure their treaties remain strong, fate has a plan of its own. Neither knows what will come of the Pack’s alliance, let alone one between the two of them. The past paved their paths in blood and heartache, but it will take the strength of a promise and iron will to find their future.

To start with I have to admit that I had never read this authors work until now and I worried that this being book 8 in the series I would be totally lost.  I was pleasantly surprised to find that while I knew I was missing pieces of the entire story I was never lost or never felt like I needed to stop reading before I ruined myself for all the books that came before this one.  This is exactly how a novella in an anthology should be written.  It gives new readers like me the story they are looking for with out leaving us confused and hooking us on a new series and it gives fans of the series what they are looking for which is another part of the tale, movement forward for books to come.

Quinn and Gina, members of different packs have been thrown together to form a council made up of members from the two packs in hopes of bringing the packs together as the fear of upcoming war looms.

The tension between Quinn and Gina starts right from their first meeting and they hook you right away.  I had all the feels with these two, love, hate, angst, fear, sorrow....it was all there.  Were there times I wanted to throttle each of them, sure, but when can't I say that about a book?  The majority of the time I spent getting invested in their emotions (especially when it came to Quinn's Son) and in the Redwood pack series in general.

One of my favorite things about this story was simply Gina and that is saying a lot because I am often left wanting to pull the hair out of most heroines heads, ha.  Gina is a strong, sassy, independent, family oriented woman who isn't going to put up with anyone's crap, especially Quinns.  I adored her connection to her family and how they all rally behind each other in times of need but know when to step back and let each person handle life on their own.  I think that may be the biggest draw to the Redwood pack series for me, these family relationships.  They are the kind of relationship we all wish we had with our loved ones and Gina's brothers totally made me melt in a puddle, a bunch of stinking sweethearts is what they are and I just know they are going to have some awesome stories in the future...ladies watch out for those Jamenson boys!

Sufficed to say I have a new series to dive into and if you are a paranormal romance fan like me I hope you will check this one out as well as all the other 1001 Dark Night Novellas! 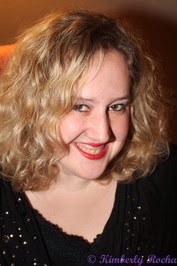 New York Times and USA Today Bestselling Author Carrie Ann Ryan never thought she’d be a writer. Not really. No, she loved math and science and even went on to graduate school in chemistry. Yes, she read as a kid and devoured teen fiction and Harry Potter, but it wasn’t until someone handed her a romance book in her late teens that she realized that there was something out there just for her. When another author suggested she use the voices in her head for good and not evil, The Redwood Pack and all her other stories were born.
Carrie Ann is a bestselling author of over twenty novels and novellas and has so much more on her mind (and on her spreadsheets *grins*) that she isn’t planning on giving up her dream anytime soon

For More information on 1001 Dark Nights check out their website (Just click the icon) and don't forget to sign up for the newsletter so you always know which book is next, especially with Facebook being so irritating these days!