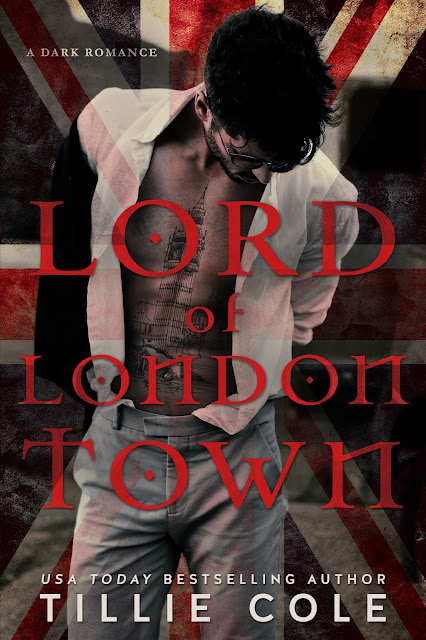 Book Description:
Cheska Harlow-Wright was born into a life of luxury and privilege. She has never wanted for anything. A comfortable future as a married London socialite
awaits her. But since the age of thirteen, Cheska has harboured a secret—an
unshakeable fixation on a boy who could never offer her anything close to
comfort. A boy steeped in sin and draped in depravity. A boy born into the
possessive embrace of darkness.
When Cheska’s seemingly perfect world is ripped apart by an unknown but
deadly enemy, there’s only one person she can run to. One person in the world
who has the power to keep her safe. The one person her weak and shattered
heart craves.
Arthur Adley. The new head of the most feared crime family in London.
Forced too young to take the helm of the Adley firm, Arthur has become even
more ruthless, formidable, and cold than ever before. His enemies are circling,
and he must fight—and kill—to maintain his family’s place at the top of the
London crime underworld. There is no room for weakness, emotion, or loss of
control.
But then Cheska smashes back into his life with the force of a wrecking ball.
She has no place in this dark, vicious, and bloodthirsty world. And worse, she is
the solitary chink in his impenetrable armour. He’s already pushed her away
once, but this time she desperately needs him. She’s broken, lost, and in danger,
and he is the only one who can help.
Arthur must protect her. He must destroy those who dare to threaten her, hunt
down those who would take what is his. He would raze all of London to the
ground to keep her safe… but can he also protect himself?
The infamous Dark Lord of London Town faces his most brutal battle yet—the
crippling weight of the past, the unrelenting enemies lurking in the shadows…
and the havoc that Cheska’s presence is wreaking on the granite fortress that
was once his heart.
Dark contemporary Romance. Contains sexual situations, violence and
sensitive subjects that some may find triggering.

I pushed my glasses up my nose and climbed the stairs. The heat of the Spanish sun slammed into me like an iron fist, and I pushed my dark hair back from my forehead. White Mediterranean buildings surrounded us, and tourists sat in restaurants and bars, gaping up at our yacht.
I joined my friends on the rear deck overlooking the restaurants and took a beer from Eric. He spread his arms. “Fucking paradise, boys.” I took a swig of my beer and glanced over to the yacht beside us. I didn’t see anyone on the back deck, but then I heard the people talking at the front of their boat, overlooking the sea.
“So, where are these spectacular views?” Charlie asked Eric, lighting up another cig.
Eric winced as he met my cousin’s waiting gaze. “Well, maybe not spectacular to you, Chuck, but definitely to the rest of us.” He flicked his eyes to Vinnie, who was circling the back deck like it was a track, and screwed up his nose. “Okay, maybe not to our resident nutjob either since he already has a bird. But to me, Freddie and Artie, what a view it is!”
“Story of my fucking life.” Charlie smirked at me. I followed Eric as he headed for the main sun deck at the very front of the yacht.
“The edge gone yet?” I asked Vinnie. He nodded, and I could see by his eyes that his medication had kicked in. His pupils had dilated a bit, and the shaking in his hands had lessened. “Getting calmer by the second, Artie. Getting calmer by the second.” He smiled again, his deep dimples making him look a fuck-ton more innocent than he actually was. I put my hand on his shoulder, right over the face of Nosferatu with his sharp vampiric teeth that was tattooed there.
“So, who are we docked next to?” Freddie asked Eric. Freddie was six feet two with dark brown hair and brown eyes. He was slender in build but could fight like a fucking Rottweiler. His old man died a while back, for the firm, shot right through the fucking forehead by a Russian. My dad practically adopted Freddie after that. He’d lived with us in the old church for the past couple of years. He was quiet before his old man’s death. Now, compared to the rest of my gobshite mates, he was almost mute.
“Wait until you see,” Eric said, waggling his eyebrows. Eric was six four, blond and covered in bright-as-fuck horror-themed clown tattoos. His hair looked like something straight from World War Two—combed over like a good little British solider. Claimed birds got wet for it—we all knew that was mainly referring to Betsy, my cousin and Charlie’s little sister. But neither he or Betsy ever talked about that. He also rarely shut his mouth. But that didn’t matter when shit hit the fan. He had your back, one hundred percent without question.
As we turned the corner, I saw movement on the yacht beside us. Birds in bikinis, some topless. I couldn’t care less. Seen one pair of tits, you’d seen them all. Bored already, I lit another cig and moved to the front of the yacht. I looked out over the ocean.
“Nice tits, sweetheart!” I heard Eric shout behind me. I glanced over to the yacht beside us and saw two girls sunbathing, looking our way—one with dark skin and jet-black hair that fell in spiral curls to her shoulders, and one with light freckled skin and red hair down to her waist.
I went to turn my head again, when someone walked out from below deck and toward the two sunbathers. The hand holding my cig stopped en route to my mouth when I saw her long legs and olive skin. The dark hair that was pulled up on top of her head. She was wearing a white bikini, fucking curves like an hourglass.
As if she was feeling my stare, she looked over, and the minute she did, I recognised those eyes. Those big fucking eyes that were fixed on me and widening by the second. Green-brown eyes that I never fucking forgot …
Cheska Harlow-Wright …

Tillie Cole hails from a small town in the North-East of England. She grew up on a farm with her English mother, Scottish father and older sister and a multitude of rescue animals. As soon as she could, Tillie left her rural roots for the bright lights of the big city.
After graduating from Newcastle University with a BA Hons in Religious Studies, Tillie followed her Professional Rugby player husband around the world for a decade, becoming a teacher in between and thoroughly enjoyed teaching High School students Social Studies before putting pen to paper, and finishing her first novel.
Tillie has now settled in Austin, Texas, where she is finally able to sit down and write, throwing herself into fantasy worlds and the fabulous minds of her characters.
Tillie is both an independent and traditionally published author, and writes many genres including: Contemporary Romance, Dark Romance, Young Adult and New Adult novels.
When she is not writing, Tillie enjoys nothing more than curling up on her couch watching movies, drinking far too much coffee, while convincing herself that she really doesn’t need that extra square of chocolate.