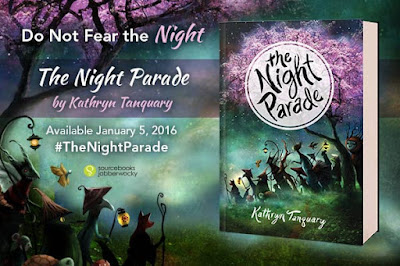 I am very excited to be a part of this spotlight tour for Kathryn Tanquary's, The Night Parade.
The Night Parade is a Middle Grade Fantasy Read from Sourcebooks
and will be available 5 January, 2016 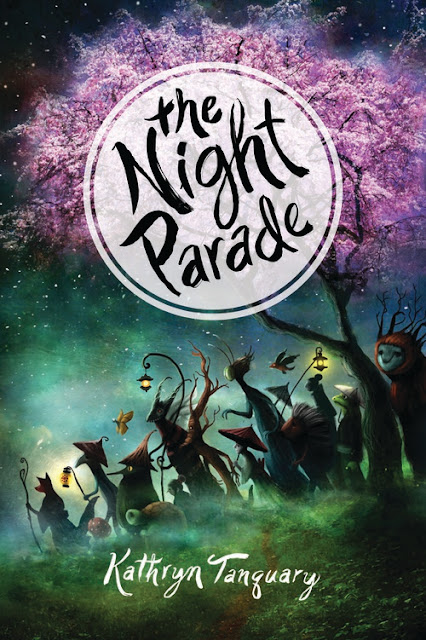 The last thing Saki Yamamoto wants to do for her summer vacation is trade in exciting Tokyo for the antiquated rituals and bad cell reception of her grandmother's village. Preparing for the Obon ceremony is boring. Then the local kids take an interest in Saki and she sees an opportunity for some fun, even if it means disrespecting her family's ancestral shrine on a malicious dare.

But as Saki rings the sacred bell, the darkness shifts. A death curse has been invoked... and Saki has three nights to undo it. With the help of three spirit guides and some unexpected friends, Saki must prove her worth - or say good-bye to the world of the living forever.

In the dead of night, she woke to three cold fingers on her neck.

Saki blinked in the darkness. The sliding door was open to the forest. The fingers pressed against her jugular, and bright, thundering panic surged through her body.

The fingers curled down toward her throat.

She tried to open her mouth to scream, but her jaw was locked shut. Her hands groped for her phone under the futon. Before she reached it, she touched her grandfather’s worn-­out charm. The three fingers retracted, leaving her skin cold and bloodless.

Saki flipped around. Lying on her back, she stared up into a pair of eyes.

It was not her brother.

It knelt next to her on the tatami floor, knees brushing the edge of her pillow. Her brother’s futon was empty, and the blankets were flung around the room. It may have been Jun’s body kneeling there, but whatever stared back at her was not her brother.

The clouds shifted, and light fell through the open door, burning moon-­blue on everything it touched. Her not-­brother’s eyes reflected the light like a will-­o’-­the-­wisp.

“I thought you might sleep through it.” The creature smiled. Her brother’s teeth seemed sharper than usual.

Saki touched her hand to her jaw. It unlocked. Her voice was little more than a whisper. “Sleep through what?”

It leaned over. She stared into its will-­o’-­the-­wisp’s eyes.

“The Night Parade, of course.”

With a single movement, it was standing by the crack in the door. The forest stretched on into the night.

Saki scrambled to her knees. She pulled a blanket around her shoulders and clutched her phone to her chest.

“W-­what have you done to my brother?”

It rolled her brother’s eyes around the room and licked his teeth. “Impressive, isn’t it?” It opened its arms and looked down at the body it had taken. “Of course, beautiful maidens are traditional, but we must work with what we have, no?”

Saki eyed the backpack in the corner. It was heavy enough to swing in a pinch. “If you touch me, I’ll scream.”

The creature with her brother’s body became very serious. “Oh no, that won’t do any good. They won’t hear you anyway. This is your burden, little one.” It barked out laughter, eyes wide open, reflecting the moon.

“Why do you refuse to believe what you observe to be true?” it asked. “I don’t know what sort of game you’re playing at, girl. You invited me here.”

It dropped on her brother’s knee beside her. “Don’t you remember? On hallowed ground, you put your hands to the summoning table. You called out our names. You rang the bell. So we came to you, as we must. Well, I came to you.”

“No and yes. I am the first of three. The others will be along later.”

“Oh yes. I’m always the first, whether I like it or not. The third you will like very much. Everyone likes him. But the second…” It covered her brother’s mouth as a malevolent glee twinkled in its eyes. “Oh my. I daresay you will not like him at all. Very…scary.” It curled and uncurled her brother’s fingers.

“No,” Saki said. “No. No, no, no, no.” She pulled the blanket over her head and rolled into a ball on the floor. “This is crazy. This is insane. This is not happening. I am asleep and having a dream. When I wake up, it will be over.”

The creature sighed. “Very well. If that is your
final decision…”

Saki waited underneath the blanket. The wind whistled through the cracks of the old house, but after more than five minutes, she heard no sounds of the stranger anywhere. Bit by bit, she peeled back the blanket and peeked over the top.

Her brother slept soundly on a mess of tousled blankets. His face squished against his pillow as he drooled a bit down the side. His eyes were closed and didn’t shine at all in the moonlight. Saki wrapped her blanket around her shoulders as she rose to shut the open door.

On the wooden walkway in full moonlight sat a fox with four tails.


Rafflecopter Giveaway Link:
Enter to win a copy of The Night Parade by Kathryn Tanquary
(U.S. and Canada only): 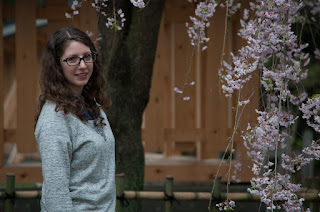 Kathryn Tanquary is a graduate of Knox College with a B.A. in Creative Writing. She currently resides in Japan as a teacher of English as a Foreign Language.