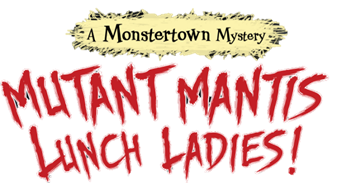 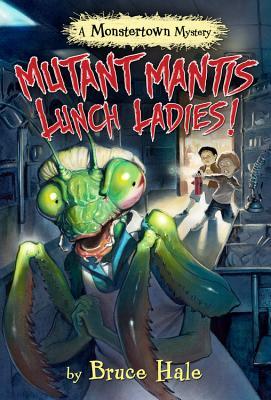 How well do you know the lunch servers at your school? Sure, they seem like nice people, but what if secretly they are something much, much weirder?
Best friends Carlos and Benny, who just saved their teacher from becoming a were-hyena, have been called upon to investigate the strange goings-on in the cafeteria. Why are the lunch ladies suddenly so grumpy? Why are the girls' meals different from the boys'? And what was that thing seen scuttling around the kitchen wearing an apron?
It's going to require a lot of courage--and more than an industrial size can of Raid--for the boys to avoid extermination in this buggy adventure.

The first thing that I loved about this book is the beginning, I know that sounds silly but you will totally understand when you read it.  I loved that I had no clue what was going on and I thought, OMGosh, what have I missed...is there another book in this series, besides The Curse of the Were-Heyena?  We met Carlos and Benny in that first Monstertown Mystery but there was no talk of Mutant Mantis Lunch Ladies so what's going on....then the author said (haha while pointing at me and laughing) and I had to nod my head and admit, hands held up in surrender, "you got me!" It was my first laugh of the book but definitely not the last.

Benny and Carlos are coming of the 'high' of having saved their teacher from becoming a were-hyena, they have discovered that their average little town of Monterossa isn't so average and they are now of course experts when it comes to all the weirdness that seems to keep popping up at their school.  First Were-Heyena's and now 2nd graders are disappearing, a new lunch system based of of differing nutritional needs of the boys and girls has been implemented, girls are starting to take on middle school boy traits, and there have been unconfirmed spotting of overgrown bugs in the lunch room...like really overgrown, adult people sized over grown.  What's going on in Monterossa and can Carlos and Benny solve the mystery in time?

Muntant Mantis Lunch Ladies is just plain and simple a fun book.  If you have readers that are looking for a light mystery full of action, adventure, witty come backs, some (mom speak here) not so polite behavior, silliness, and most importantly a strong friendship then this is a perfect read to have on hand.  I really get a kick out of these two boys.  They are just a fun couple of kids and while we get caught up in all the madness that surrounds them there are the wonderful underlying stories about sibling relationships, about knowing when you need help and not being afraid to ask for it, about realizing that the majority of adults are supportive and caring, about realizing that there is a fundamental difference in the world in the way boys and girls are treated.  No, this book isn't going to 'preach' at your young readers about gender equality but it could be the little eye opener to a generation that hasn't yet discovered these differences. It is subtle but it is there and maybe that will sit in their minds as they age and help them to look toward the future with an open mind.

Having said what I just said don't get nervous that this book is too deep, it is not.  The things I just talked about are all small underlying bits that weave the story together, they are points that aren't going to jump out on the pages for young readers but they may plant seeds and none of those seeds would be bad to plant in young readers minds.  Caring for your family, having strong friendships, opening your mind to girls and boys being able to do the same things...these are all great concepts for your young readers to have marinating around in their brains even when they don't realize it yet.

In the end this is simply put a fun read.  Your readers will be engaged, laughing, sitting on the edge of their seats waiting to discover what mayhem comes next.  They do not have to have read The Curse of the Were-Hyena to read Mutant Mantis Lunch Ladies, these books are all standalones with in the seres.  This is a fairly easy read so even your younger MG readers will be able to get through the book in just a few days, maybe even less with how engaging the story is.  I have to say these would be so much fun to see in a comic book style too...so maybe in the future and because of that if you have Manga or Anime readers in your classroom that have been reluctant to pic up a 'traditional' book this might be the perfect choice for them.

I have an ARC copy so the cover isn't in the Lenticular style like the finished copies will be but I can't wait to see them.  I think it's going to be such a draw to some reluctant readers and honestly I can't wait for it because I just want to play with it, haha.  If you have readers at home that like any of R.L. Stine's book, or the Terrible Two series by Mac Barnett and Jory John you will have fans of the Mostertown Master Series.  If you have boys in your classroom that feel like they struggle to find books with strong boy hero you will want this on your shelves, if you have girls that are tired of reading about princesses or ponies and want something that takes them out of the magical fairytale like realms you will want this series. 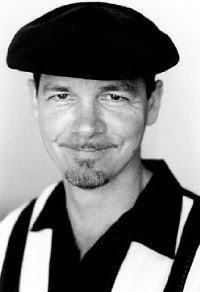 Raised by wolves just outside Los Angeles, Bruce Hale began his writing career while living in Tokyo, and continued it after moving to Hawaii. He’s too modest to mention his Nobel Peace Prize and his Olympic Gold Medal (in long-distance procrastination), so we won’t mention them. Before entering the world of children’s books, Bruce worked as a magazine editor, toymaker, gardener, actor, corporate lackey, and DJ.

From picture books to novels and graphic novels, Bruce has written and/or illustrated over 40 books for kids. His popular series include the award-winning Chet Gecko Mysteries, School For S.P.I.E.S., and Clark the Shark, among others.

When not writing or illustrating, Bruce loves to perform. He has appeared on stage, on television, and in an independent film called The Ride, where he played a surfer’s agent. Bruce is a popular speaker and storyteller for audiences of all ages, from the lunchroom to the boardroom. In 1998, he won a Fulbright Grant to teach storytelling and study folklore in Thailand. (No, he doesn’t speak much Thai, but he loves the food.)

A member of the National Speakers Association, Bruce has presented at colleges, universities, and conferences, both nationally and internationally. On top of that, he has visited schools and libraries from New York to New Delhi. (And yes, he loves to travel.)

These days, Bruce lives in Santa Barbara with his wife, his sweet mutt, Riley, and his massive collection of hats. When he’s not at the computer or drawing board, you can find him hiking, kickboxing, watching movies, or bicycling. Bruce also sings with a latin jazz band called Mezcal Martini.

And for all those who have asked…