She Wants It All by Jessica Calla - Cover Reveal and Giveaway

Cover Reveal! SHE WANTS IT ALL (Book 3, Sheridan Hall Series) 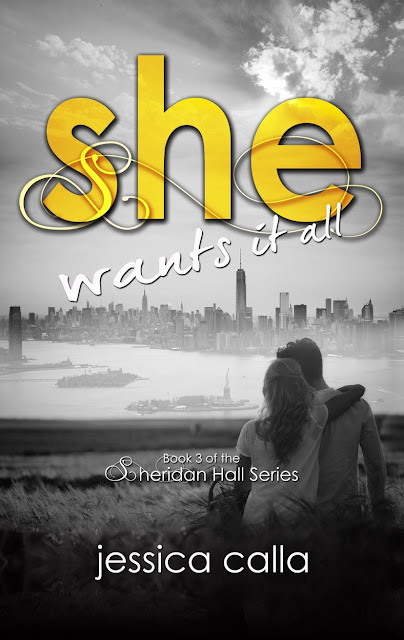 Happy to sing cover songs with his band and float through New Jersey University with little to no effort, Dave Novak spends the first week of college partying. Then he meets Maggie Patrinski. Performing on stage in front of hundreds is easy for Dave, but the mere thought of Maggie sends his heart racing and turns him into a bumbling idiot. Even so, he can’t get her out of his mind.

Maggie’s not exactly thrilled when her roommate sets her up with Second Floor Dave, the hottie with a reputation. Not only has she just had her heart broken, but she’s vying for a competitive summer internship and studying to become a vet. She doesn’t have time for guys and isn’t interested in falling in love, especially when she may be moving across the country for the summer.

But as Maggie gets to know Dave, his charm wins her over and she falls hard and fast. The problem? Maggie has goals, Dave doesn’t. Maggie studies, Dave doesn’t. Maggie wants it all, Dave only wants her. With their summer plans up in the air and past mistakes creeping back into their lives, their future together is uncertain. The only thing they’re sure of is that when they’re together, they’re better.

Other Books In the Sheridan Hall Series...

Jessica Calla is a contemporary romance, new adult, and women's fiction author who moonlights during the day as an attorney. If she's not writing, lawyering, or parenting, you'll most likely find her at the movies, scrolling through her Twitter feed, or gulping down various forms of caffeine (sometimes all three at once).

Jessica is a member of Romance Writers of America, involved in the Contemporary, Young Adult, and New Jersey Chapters, and is a member of the Women’s Fiction Writers Association. A Jersey girl through and through, she resides in the central part of the state with her husband, two sons, and dog.