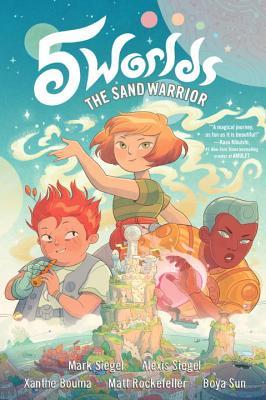 The Five Worlds are on the brink of extinction unless five ancient and mysterious beacons are lit. When war erupts, three unlikely heroes will discover there's more to themselves and more to their worlds than meets the eye. . . .
The clumsiest student at the Sand Dancer Academy, Oona Lee is a fighter with a destiny bigger than she could ever imagine.
A boy from the poorest slums, An Tzu has a surprising gift and a knack for getting out of sticky situations.
Star athlete Jax Amboy is beloved by an entire galaxy, but what good is that when he has no real friends?
When these three kids are forced to team up on an epic quest, it will take not one, not two, but 5 WORLDS to contain all the magic and adventure!

What an enjoyable read.  I chose this one thinking of my reluctant middle grade reader but found that I enjoyed it just as much as she did.  It took her a few days to get through it, but considering how fantastic the art work is that is no surprise, you could spend days just perusing the pictures.  For me it was a quick read, though I will say don't expect that you will just blow through it otherwise you will miss a lot of little details.

When I asked her what she thought she said (she's 8): "I really liked this one.  I liked how there were the 5 worlds and everything needed to be saved.  That there were Sand Warriors (to this she added in a little dance, ha), and the plant people were really cool. Oona was my favorite!"

I loved that three different characters from three different backgrounds come together in this book and find a way to not only work together but to become friends.  They are able to set aside all that they think they know about each other and instead learn the truth of who they each are and accept one another because of those differences.  I loved that Oona is just this average girl who when she finds her own strengths and stops believing what others have said about her she becomes the hero we knew she could be.  I loved that Jax, this bigger than life athlete isn't what any one expects at all.  I loved that Tzu, who may not have wealth is the richest of them all because he is the one to bring them all together.  He is the friend that binds them, encourages them, and stands beside them.  I loved that while this is a fantasy, there is the underlying story that we must take care of our world if we want it to thrive.

My only challenge, and this could simply be because I am not an avid graphic novel reader, is that there were a few times I felt like I missed something.  Now, maybe that's because there are stories still to be written and they don't want to give away everything at once, I am not sure, but a few times the plot veered off and I really wanted more. It may be that because they had so much information to get out in this first book some things that will be touched in other books were just left out of this one.   I will mention that my 8 year old never mentioned not knowing what was going on so again, this may just be me, haha.

Like I mentioned above the art in this book is just wonderful, I believe that, unlike in the ARC, finished copes will be in all color which in the few pages I saw is amazing.  You really can get lost just looking at everything.  There is still a lot of story to be told and I can't wait to see what happens, how everything develops and plays out.  If you are a graphic novel fan I think this is the start to an amazing new series and I hope that you will pick it up!  Teachers, this is a great book to have in your classrooms as it will appeal to boys and girls, reluctant and advanced readers, as well as having a plethora of teaching opportunities, from friendship and bullying to environmental and cultural studies. 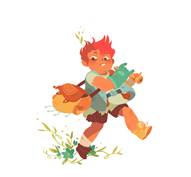 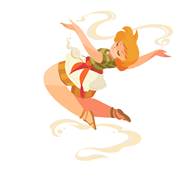 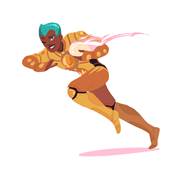 MARK SIEGEL has written and illustrated several award-winning picture books and graphic novels, including the New York Times bestseller Sailor Twain, or the Mermaid in the Hudson. He is also the founder and editorial director of First Second Books. He lives with his family in New York. Follow Mark on Tumblr at @marksiegel and the 5 Worlds team on Twitter at @5WorldsTeam.

ALEXIS SIEGEL is a writer and translator based in London, England. He has translated a number of bestselling graphic novels, including Joann Sfar’s The Rabbi’s Cat, Pénélope Bagleu’s Exquisite Corpse, and Gene Luen Yang’s American Born Chinese (into French).

XANTHE BOUMA is an illustrator based in Southern California. When not working on picture books, fashion illustration, and comics, Xanthe enjoys soaking up the beachside sun. Follow Xanthe on Tumblr at @yumbles and on Twitter at @xoxobouma.

MATT ROCKEFELLER is an illustrator and comic book artist from Tucson, Arizona. His work has appeared in a variety of formats, including book covers, picture books, and animation. Matt lives in New York City. Follow him on Tumblr at @mrockefeller and on Twitter at @mcrockefeller.

BOYA SUN is an illustrator and co-author of the graphic novel Chasma Knights. Originally from China, Boya has traveled from Canada to the United States and now resides in the charming city of Baltimore. Follow Boya on Tumblr at @boyasun and on Twitter at @boyaboyasun.