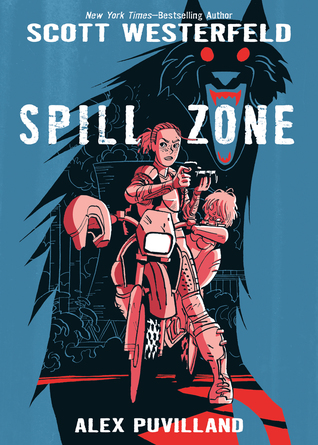 Nobody's ever really explained the Spill. Was it an angelic visitation? A nanotech accident? A porthole opening from another world? Whatever it was, no one's allowed in the Spill Zone these days except government scientists and hazmat teams. But a few intrepid explorers know how to sneak through the patrols and steer clear of the dangers inside the Zone. Addison Merrick is one such explorer, dedicated to finding out what happened that night, and to unraveling the events that took her parents and left her little sister mute and disconnected from the world. 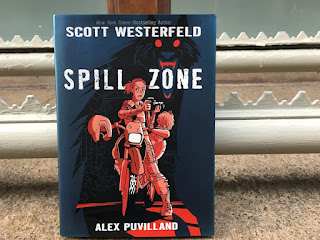 (Photo taken in New York City by First Second Books, an area you might find in Spill Zone)

My first finished read in May and it was fantastic. I'm just making my way into the world of Graphic Novels so the choppiness of the written story sometimes drives me nuts but I never felt like I was missing anything or that the story was jumping all over with this one like I have with others. I will say this was not what I expected and that turned out to be a wonderful thing. If you can, go in 'blind' like I did so you are left completely engrossed in what is happening.

You'll love the heroine, she is hard core in the best possible ways. There's a little bit of a potential romance. There is suspense and surprises around every corner. A possible government coverup, a fantastic creepy vibe, and a big (but not maddening) cliff hanger. The art perfectly matches the feel of the book and lends to the plot instead of taking away from it. This isn't a graphic novel that you'd rather just stare at the pictures than read the story, this is a perfect blend of graphics and words making a story that will have you on the edge of your seat and not stopping until you get to the end.
A great thing about graphic novels is you can easily rest them in one sitting but then turn around and pick it right back up again and see something completely new.

I will say that this is closer to a mid YA level just due to mature language. I'm considering letting my 11 year old read it because I think she'd find it interesting but the language has me hesitating just a bit. It's not like she's hasn't heard the words before, I just feel kind of bad handing over a book with a bit of strong language. I am glad on that note that I picked it up and read it before just giving it straight to her. Again, is not a huge deal but know this is a YA graphic novel not a middle grade one. If it were a video game it would be rated T for Teen not E for Everyone, haha. It was a great read for me though and can't wait for the next installment!

Scott Westerfeld is a New York Times bestselling author of YA. He was born in the Texas and now lives in Sydney and New York City. In 2001, Westerfeld married fellow author Justine Larbalestier.

He is best know for the Uglies and Leviathan series, and his next book, Afterworlds, comes out September 23, 2014.

His book Evolution's Darling was a New York Times Notable Book, and won a Special Citation for the 2000 Philip K. Dick Award. So Yesterday won a Victorian Premier's Award and both Leviathan and Midnighters 1: The Secret Hour won Aurealis Awards. Peeps and Uglies were both named as Best Books for Young Adults 2006 by the American Library Association.