The New York Times Bestselling author of the On Dublin Street series and PLAY ON returns to the world of the arts in this intense and emotional standalone romance about love, sacrifice, and surviving both.

AS DUST DANCES is now available on all retailers! Grab your copy today! Once upon a time Skylar Finch was the lead singer of a hugely successful American pop-rock band. But fame made her miserable. When years of living a lie suddenly ended in tragedy, Skylar fell off the map.

Eighteen months later she’s sleeping in a tent in a cemetery in Glasgow, making just enough money to eat by busking on the streets. She manages to avoid recognition, but not the attention of one of Glasgow’s ambitious A&R executives.

Killian O’Dea works at Skyscraper Records, Scotland’s most successful record label. Raised by his uncle and owner of the label, Killian’s upbringing would have been devoid of affection entirely if it wasn’t for his loving sister. Killian is unflinchingly determined to bring the label more success than ever, and the young homeless woman who busks on Buchanan Street is going to help him do that. Her music speaks to him in a way he refuses to over-analyze. All he knows is that if it can touch his dark soul, it’ll set everyone else’s alight.

Skylar makes it clear that she doesn’t want to sign with him. But when she experiences the dangerous reality of a woman sleeping rough, Skylar has no one else but Killian to turn to. An undeniable connection forms between them. But Skylar doesn’t want the career Killian is trying to forge for her, and when her past comes back to haunt her Killian will be faced with a decision that could ruin him. He must either free Skylar from his selfish machinations and destroy everything he’s ever worked for, or lose a woman who has come to mean more to him than he ever thought possible… 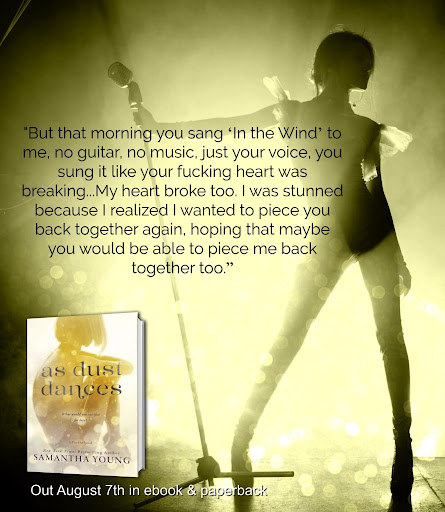 When I finished, O’Dea was sitting on the chair, his elbows braced on his knees. He was staring at the floor, like he was lost in thought. Then he looked up at me and my breath caught at the million heartbreaking emotions roiling in his gaze. And then they were gone, as if they’d never been there. “That’s all I have so far,” I whispered, so confused by him. “No more songs.” His expression was unreadable. “Your visitor’s visa is about to run out.” Bewildered by the response, I could only nod. “You’ve no money.” I tensed. “You’ve run away from your identity, from your life in the band, in the US. You’ve no family to speak of, and you abandoned your friends.” The man was the soul of sensitivity. “Your point?” “My point is that you don’t have many options. I think you were living in some naive fantasy that you could keep running from your problems and live a relatively peaceful life as a homeless person. Somehow, miraculously, you survived unscathed for five months. But last night you were given a giant fucking look at the reality and dangers of homelessness. I wish it hadn’t happened that way, but there was never any other way it was going to end. And it has ended, am I right?” “So, do you get, like, a bonus at the end of every day if you say a hundred patronizing things in a twenty-four-hour period or something?” He ignored me. “You can’t go back to sleeping rough.” “I think I got that, thanks.” I waved my cast at him. “So … it’s either call your old manager, your band—” “Not an option,” I snapped. O’Dea smirked. “Then I’m all you’ve got. And I’m no fucking Mother Teresa. I’m in the business of making money, Miss Finch. You’ve already proven you’re good at making it. And from what I heard today and have heard you playing when you busk, I think the world hasn’t even seen a fraction of what you can do.” There was really nothing to do but glare and hope that he withered under it. “I’ll let you stay here in this flat free of charge, give you a weekly stipend for clothes, groceries, a new guitar. You can heal up here. But all of it in exchange for a record contract. A one-album deal, that’s all I ask. When you’re healed up, you’ll be straight into the studio to record.” The thought made my stomach pitch. “I don’t want to be famous again.” “Tough shit. There is no being famous again. You are famous. And you’ve got more talent in your pinkie finger than most do in their entire being. And that talent deserves more of a platform than standing on a street busking. It’s a goddamned insult to all those people out there trying to make the big time. I don’t care what it is you’re running from. I care that you sort yourself out and make some music again. Music that matters. Music that will heal you.” I bristled. “I’ve made music that matters. I’ve got the fan mail to prove it.” “Your music in Tellurian did its job. It was catchy, appealing, and teenagers related. But your voice is meant for something else. The songs you just sang to me … those are songs that will really make people feel. It’s vulnerable and brutally honest and that’s the stuff that resonates with people. People want songs that make them feel good, but they also just want songs that me them feel, even if it breaks their fucking heart. You’ve been through a lot, Skylar. Even if I couldn’t read a newspaper, I’d know that by listening to those songs you sang. “Two years ago, you were a leader on social media and the lead singer of a pop-rock band that teens and college freshman loved. I’m not asking you to go back to that. I’m asking you to become an artist in your own right. If you don’t want the social media exposure, we’ll have someone else run that stuff for you. And we’ll do what we can to minimize the tabloid exposure. It will be hard at first considering your disappearance, but once it dies down, we can make it so you’re not hounded. It is possible.” “It doesn’t matter whether they hound me or not. I hate the fame. I hate the touring. I hate it all.” “No.” His expression hardened. “You don’t…”

GiveAway:
(A signed copy of As Dust Dances for 3 winners)
a Rafflecopter giveaway