We are thrilled to be sharing RUNAWAY TRAIN by Lee Matthew Goldberg with you today!

RunAway Train is a heartfelt, laugh-out-loud YA and we can't wait for you to read it! Everything changed when the police officer knocked on the door to tell me – a 16-year-old – that my older sister Kristen had died of a brain aneurysm. Cue the start of my parents neglecting me and my whole life spiraling out of control. I decided now was the perfect time to skip town. It’s the early 90’s, Kurt Cobain runs the grunge music scene and I just experienced some serious trauma. What’s a girl supposed to do? I didn’t want to end up like Kristen, so I grabbed my bucket list, turned up my mixtape of the greatest 90’s hits and fled L.A.. The goal was to end up at Kurt Cobain’s house in Seattle, but I never could have guessed what would happen along the way. At turns heartbreaking, inspiring, and laugh out loud funny, Runaway Train is a wild journey of a bygone era and a portrait of a one-of-a-kind teenage girl trying to find herself again the only way she knows how.

Age Recommendation: DEFINITELY FOR 17+, NOT YOUNGER!!!!!

This book was an emotional rollercoaster. Nico is a troubled teenage girl who loses her sister. In a drug and alcohol induced bender, her friends suggest they runaway and complete a bucket list Nico has had in her backpack. They later back out and Nico goes out on her own under the guise of staying at her friend Winter’s house. She sets off on this adventure of self discovery or self annihilation. In some ways, I wish I had done some of the things she did, such as go camping alone, climb a mountain, learn to surf, but she does it from this drug and alcohol fuel fog that she can’t really appreciate.

Nico is also not a character everyone can love. She is so angsty and grunge that she definitely wouldn’t be a person I would want to hang out with back then and in the same respect, I wouldn’t have picked up this book to read on my own.

The music spoke most to me in this book. These were all the songs that I listened to when I was a teen, as well as the songs Kristen would play to get Nico mad.

Along the way, Nico does learn some things about herself and that she knows what she wants to do for the rest of her life. She also learns that she doesn’t have to survive on the drugs and alcohol alone.

I will say that this could be a coming of age story, but I would not be letting my 14 year old ready it. I don’t understand how this was called a “laugh out loud YA novel. ” I did see that Nico’s story will continue in Grenade Bouquets, and I will be looking forward to that this summer. 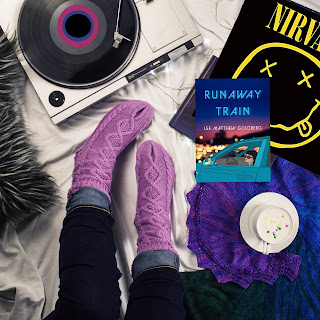 Check out the Spotify Playlist for RunAway Train!

And then head over and enter the GIVEAWAY for 1 of 3 paperback copies! Lee Matthew Goldberg is the author of the novels THE ANCESTOR, THE MENTOR, THE DESIRE CARD and SLOW DOWN. He has been published in multiple languages and nominated for the Prix du Polar. His first YA series RUNAWAY TRAIN is forthcoming in 2021 along with a sci-fi novel ORANGE CITY. After graduating with an MFA from the New School, his writing has also appeared in The Millions, Vol. 1 Brooklyn, LitReactor, Monkeybicycle, Fiction Writers Review, Cagibi, Necessary Fiction, the anthology Dirty Boulevard, The Montreal Review, The Adirondack Review, The New Plains Review, Underwood Press and others. He is the editor-in-chief and co-founder of Fringe, dedicated to publishing fiction that’s outside-of-the-box. His pilots and screenplays have been finalists in Script Pipeline, Book Pipeline, Stage 32, We Screenplay, the New York Screenplay, Screencraft, and the Hollywood Screenplay contests. He is the co-curator of The Guerrilla Lit Reading Series and lives in New York City. Follow him at LeeMatthewGoldberg.com