The city of Bryre suffers under the magic of an evil wizard. Because of his curse, girls sicken and disappear without a trace, and Bryre’s inhabitants live in fear. No one is allowed outside after dark.

Despite her caution, a boy named Ren sees Kym and begins to leave a perfect red rose for her every evening. As they become friends, Kym learns that Ren knows about the missing girls, the wizard, and the evil magic that haunts Bryre.

And what he knows will change Kym’s life.

So I have to tell you I originally picked this up based on the cover. It's one of those great covers that tell a story without you actually reading one, one of those covers you just have to pick up and flip over so you can find out exactly what it is all about.  Once I turned it over if I hadn't been hooked before I was then. An unusual heroine, a kind and heroic boy, a mystery, a dragon....the makings of a great story.

This book is a melding of fairy tales and Frankenstein, a high fantasy for the younger crowd, but with enough depth that it is a great book for older middle grade readers who are moving into young adult books.  As an adult it was easy for me to see where this book was headed but I think for a young reader it will have just the right amount of mystery to keep them hooked.  Kymera  (a play on Chimera) a girl who has no one but her father, a girl who was created for a 'greater purpose' but what if that purpose is all wrong, what if everything she believes isn't the truth? What will this young girl with a heart of gold, a deep sense of right and wrong, of loyalty and love do when her world is turned upside down.  I really enjoyed the character of Kymera (Kym), the author does an amazing job of showing us exactly who she is.  Part girl, part beast, all heart.  This is one of those books that you can't talk about too much with out giving something away so I won't get too deep on you.  I will say that I loved watching Kym grow,  how she goes from being a timid girl who only wants to please her father, to the curious girl with a few secrets, the girl who begins to find friends and freedom, the girl who has to overcome, and the girl who becomes the hero.  It's a true coming of age story that I think will really appeal to the 10ish and up crowd.

"If there was any doubt I have to hide the roses from father, it is gone.  His words tear apart my insides.  I cannot believe what he said is true of the boy.  If the humans caught me, I could defend myself.  That is why Father game me the claws to fight, the tail to stun, and the wings to flee.  I want to please Father, but it is no longer the only thing I desire.  I want to see that boy again."

Another thing to note, this is not a happy go lucky book.  This book is melancholy, it has a lonely feeling to it at time, times when you want to break down for the characters.  It also has truly sweet moments as well.

"I leave the safety of my shadows and circle the fountain, the cherubs happily spraying me as I pass.  There, on the edge of the fountain, is a perfect red rose.  Its scent must have mixed in with the other roses in the area, masking it from me until now.  The boy who smells like bread and cinnamon left me a rose."


I love how well developed this world is.  The author isn't flowery with her words, but they just flow across the page transporting you right into the book.  She writes with a beautiful simplicity, but doesn't take away from the intelligence of middle grade readers.  If you are your reader are fans of fairy tales or fantasy I think this is a great read.  Please keep in mind it is a bit on the dark side, but it is a lovely, fast paced, and entertaining story with just the right ending.  I think your reader will walk away feeling like they were touched by this story and it will stick with them for quite some time. Your Middle Grade Readers first book hangover.  *wink* 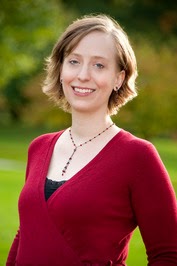 When I was a child I dreamed of becoming a Broadway star. I read my first Shakespeare play (A Midsummer Night’s Dream) in elementary school.
The rest is history.
It wasn’t until I went to Hampshire College that I began to write and compose seriously. I wrote an opera chronicling Hamlet’s journey through the afterlife and using a potpourri of Shakespeare’s own words for the libretto as the culmination of my course work. Eventually I realized that one of my favorite parts of the process was devising the plot of the opera. While I still dabble with music from time to time, my main creative outlet is now writing books.
Though I’ve written poetry as long as I can remember, I began my first full-length novel in 2008. Since then I’ve completed many other novels including MONSTROUS (Upper MG Fantasy, Frankenstein meets the Brothers Grimm) and have several others languishing in various states of incompletion and disarray. I have more book ideas than I know what to do with, so I always have many other projects in the works!