Into the Dangerous World by Julie Chibbaro - Review and Giveaway 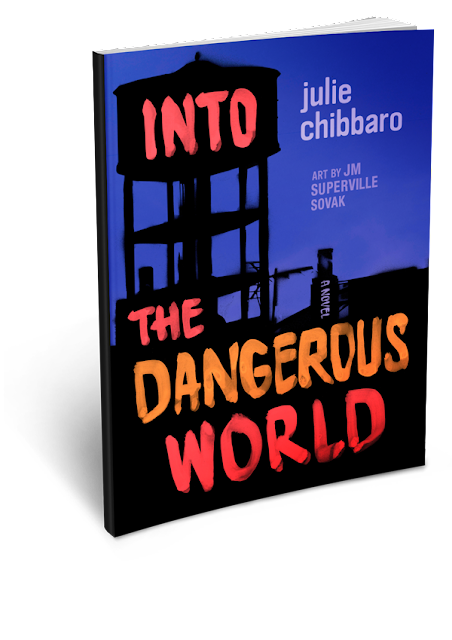 
Ror lives to draw—to her, it’s like breathing; it’s how she understands life. Raised on a Staten Island commune, she’s never attended a day of school, and knows little of the outside world. When her paranoid father burns down the commune with himself inside, Ror, her mother, and sister end up in a homeless residence in Manhattan. There, she runs into trouble—and love—with Trey, the leader of Noise Ink, a graffiti crew.  On the city’s streets, and in its museums and galleries, Ror finds herself pulled in different directions. Her father wanted her to make classic art. Noise Ink insists she stay within their lines. Her art teacher urges her to go to college. But what does she want? Ror’s soul-searching—expressed in remarkable drawings and sharp-edged prose, set in the gritty Manhattan of 1984—is cinematic in its scope, and its seamless blend of text and art makes Into the Dangerous World a groundbreaking event in young adult fiction.

This is a rather difficult book for me to review because it is so far out of my realm of expectancy and has such an amazingly personal feel to it that I almost feel like reviewing this book is the equivalent of telling another person how I feel about all their life choices as a teenager.

One thing I did not realize going into this book is the era in which it covers.  This is the era of my childhood (although, and I have to admit this to make myself feel better, I was not quite a teenager during this time), this was a time that our society found itself in a bit of an upheaval.  The Vietnam War had only 'ended' ten years prior to the stories timeline, We were on the cusp of the Cold War, the idealism of the 60's and 70's had come seemingly to a screeching halt as people struggled to find a new identity in a post wartime world where government, inflation, conservatism, and materialism had begun to explode.  This is a time where a generation of teens were lost in the fray, trying to find their own places as they began to mature and come into themselves, a time where a lost generation of children were trying to fight the changes around them and find their voices.

All that being said...Teens of today's world, do not set this book aside as the book of your parents generation.  Do not think that this is a story that won't resonate with you because it came from a time before you were a blip in the atmosphere.  Do not think that because this book is as much a history book as it is a fiction story that you won't find it interesting because in each of these things you would find yourself mistaken.  This book is a book that can and will open your eyes to the world that was being shaped while your parents were your age now.  This is a book about self discovery, about fears, and desires.  A book about finding your place in this huge machine of a world, of standing your ground, taking chances, and becoming the person you are meant to be.  This is a book that will surely grab your attention and get you asking questions of your teachers and parents.  It will remind you that  while in each generation we feel like we are the only ones, that no one could ever feel the way we do, or struggle the way you do, YOU are not alone.  We may not all travel the same path but we have all been at the same point sometime in our lives...simply said, your parents understand you more than you may ever realize.

Aurora (Ror) is quite the conundrum for me, as much as I think she is for herself actually.  She grew up in a faltering commune living by the ideals her father (Dado) set forth and attempted to foster.  After tragedy strikes the family, Ror, her mother, and her older sister are forced to now rely on a system which they had shunned, a system which is fundamentally broken and leaves them struggling to survive in the harsh world of New York City's poverty.  She is thrown in to the public school system as a sophomore who is artistically inclined, been burned badly enough that she feels the need to cover her head with knit caps, was raised and home schooled in a 'hippie' commune, and taught to fear 'the man'.  This would be a Dangerous World to any teenager, a world in which they don't fit in, are labeled, and if not outright bullied then ignored, but this is the world she now has to find her own place in and she begins to do that through her art.

I really would have loved to have more of her story.  I would not say that the book ended abruptly but to feel as though you have travelled this incredible journey of self discovery with Ror and never know what happens to her as she goes out 'Into the Dangerous World' was a bit of a downer.  I know we should all take that moment to use our own imaginations and see her future through our own eyes, but man I would have liked to have heard it from the author, at least in a epilogue. I think the reasoning is because as I said in the beginning of this review, I felt like this was a truly personal story in many ways and I need to know how it ended from their eyes because I could simply not do it justice.

Readers will love the art in the book, it has a bit of a graphic novel vibe to it, which truly just enhances the story being told.  It makes it so much easier to visualize everything Ror and the NoiseInk Crew do, especially for readers like myself who are not artistically inclined, ha.  I have to admit to googling 'Fire Pop' and I am still not certain I know exactly what that artistic term means, although I am going with my best guess, haha.  I am a HUGE fan of e-readers as many of you know and I did read this book as an e-copy but I think in this case this is a definite hard copy kind of book.  I think having the ability to physically touch the pages, the art, would make the connection to this story even more emotional.

This is a great read for young YA readers (14 and up) as well as adults.  For me it was a bit of a look back into my history (although I grew up in a very different way) and made me want to search out information that I would not have had about our society when I was a teen.  For teens, I think this is an important book of self discovery, of learning to trust yourself.  I would love to see this book in high school/college English Lit classes being analyzed and discussed.  I think it could truly open a whole new world for people.

**This book does deal with the death of two parents and some of the harsh reality of living in poverty. Please for parents of younger YA readers especially, although I would suggest this to everyone, take the time to discuss this book with your reader!** 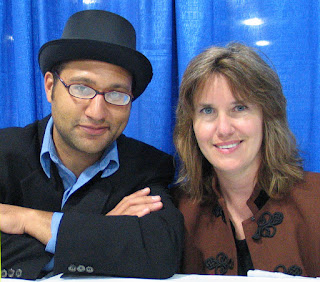 Julie Chibbaro and Jean-Marc Superville Sovak are the husband and wife duo behind Into the Dangerous World (Viking 2015).
Julie Chibbaro was born into a family of artists, and also married one. She grew up in NYC during the explosion of graffiti art. She has written two historical novels, Redemption, which won the American Book Award, and Deadly, which won the National Jewish Book Award. JM Superville Sovak is half-Trini, half-Czech, half-Canadian. His fourth half is spent making art, for which he earned his M.F.A. from Bard College in NY.
They both live in Beacon, NY.

For those of you that purchase a copy of INTO THE DANGEROUS WORLD any time during the official book tour (August 18-September 30) will receive a one of a kind #IntoTheDangerousWorld pack filled with lots of goodies.
(While supplies last)
To qualify you must send proof of purchase to amydelrosso(at)gmail(dot)com. 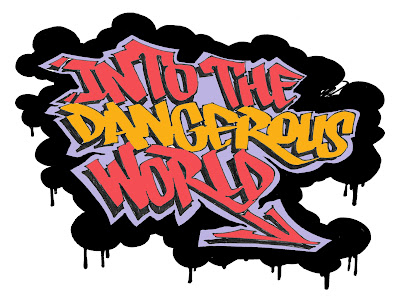