I am excited to share the cover of Entangled by Alex Rosa with you!
This is the fantastic sequel to Tryst and it’s coming out
June 2016.
Check out this excerpt and enter her giveaway!

In the emotional and dramatic sequel to Tryst, Skyler and Blake’s relationship is finally out in the open. But as new challenges open up old wounds, their love is put to the ultimate test...   Blake is desperate to be the kind of man that Skyler deserves, but with his latest film putting him on the verge of superstardom, being there for her is growing harder and harder. As his filming schedule takes him on the road and away from the woman he loves, he discovers that being in a public, committed relationship is no easy task—especially from two thousand miles away.   Skyler wants Blake to pursue his dreams, but his constant absence weighs on her more than she admits. Even as she throws herself into new distractions, she finds herself facing uncertainties and jealousies that could tear apart everything they’ve built. And when disaster strikes while Blake is away, she’ll have to decide if their passion is worth the pain...


Catch up on the Series: 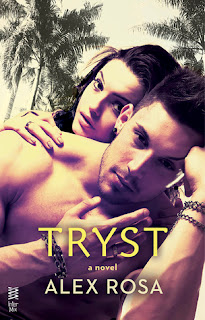 Josh shakes his head, admonishing me. “Help your bro out and tie his tie.” Lifting his chin upward to signal my help, I giggle. “You wear a tie nearly every day. Why the help all of a sudden?” Blake’s ego make’s a surprise appearance from behind me as he quips, “It’s got to be because of his girl. What is it this week, Josh?” Josh’s stare frosts over, but if anything, among his anger I sense a bit of fear as he grunts, “Shut up, Blake.” Blake sticks his hands in his pockets, and struts around us, nose in the air. “C’mon, man. Don’t act like I don’t know you. There are only two things that make you nervous as hell. One, is spiders, you pussy. The second, well, that’s easy —commitment.” My throat goes dry as I loop my brother’s tie into a Windsor knot. I mean, this conversation is perfectly normal, but let’s not forget Josh is my brother, and his girlfriend, Vanessa, is one of my best friends. The idea of throwing commitment into the already awkward equation throws me. I peer up from my tying to see Josh already staring at me apprehensively. He chews the inside of his cheek, and releases a huff. “I’m not a commitment-phobe.” Why is it I feel like I’m intruding on their conversation as I make my final adjustment to my brother’s tie? Blake swivels around, smug and smiling, as if proud to admit whatever he’s about to say. “Bullshit. You and I both know we avoid commitment. It’s practically why we became friends. We understand each other. We avoid commitment by nature, but hey, that was until we met girls that handed our hearts to us on a silver platter, right?” Josh cannot fight his agreeing chuckle, but tries to cover it up as he shoots me an apologetic smirk. “I guess I can’t argue with that. Vanessa’s worth it though. And don’t forget, you break my sisters heart, I ruin you.” “Oh, ruin me? No death threats this time?” Blake goads with more attitude than I think he intends. Josh turns around to face him, and it almost seems playful. I’m hopeful for an element of normality between them. “I think it’s fair to assume both.” Blake clicks his tongue, and I hate that I think Blake looks hot when he goes into alpha-asshole mode when I know I should be scolding him, but then again, sometimes it’s good to stand up to Josh. “What makes you think she won’t break my heart?” Blake brazenly retorts. There’s a pause in the room, and both men swing their stare to me. Do I look like a deer in the headlights? Because I feel like one. The thought never crossed my mind that I would ever break anyone’s heart, let alone Blake’s. I consider my college friend and tutor, Richard Bennett, as a possible broken heart when I denied his advances, but he ran back into the arms of his ex, Heather, so it seems far from fair for it to qualify. Josh smiles warmly at me before turning back to Blake. “Skye? She can barely kill ants. What makes you think she would do the heart breaking when you’re far more experienced in that department?” Blake’s angular face blushes an adorable pink that’s so unlike him as he bashfully turns away, avoiding Josh’s glare. “Because I love her, man. Duh. She holds all the cards. When have you ever heard me say that?” Josh swallows down the idea before huffing, “I don’t know how I expect to get used to hearing that.” With Josh’s back to me I release my full ear-to-ear grin at hearing Blake. He peers over Josh’s shoulder to purposefully lock his stare with mine. The delicate, and charming wrinkling around his eyes confirms everything, and more. I’m caught in his spell as I pull in a deep inhale, eager to breathe him in, touch him, feel him —to just be near him. He knows it too as the corner of his mouth arches upward, and it’s as if he’s beckoning me. Josh, sensing the forming tractor beam going right past his face turns his body, which only gives me the opening I need to begin my sprint into Blake’s arms. Blake pulls his hands out of his pockets just in time to catch me. I look up into my favorite emerald eyes, trying to speak in a whisper, “You don’t have to say things like that, you know?” thinking that maybe he says them to prove something, whether it’s to me or Josh. He runs the tip of his nose down the bridge of mine, and that perfect bubble forms around us, and I haven’t got a care in the world. “I know I don’t have to, but I want to. It’s the truth, isn’t it?” Josh adjusts his throat loudly, rolling his eyes as he does it. Blake and I turn our attention to him. “Spare me the PDA until I get used it, will you?” Josh snaps. Blake defiantly drags his hands down my back, getting dangerously close to my ass. This time I’m the one who wants to roll my eyes, but it’s hard to ignore my body buzzing with anticipation at the movement. Could we NOT do this front of my brother, please?

Alex Rosa lives in San Diego, California. When she isn't scouring city parks or cafe's to write she is more than likely trying to convince her friends to join her on her next adventure. A sufferer of wanderlust, she is always looking for a new mountain to climb, a canyon to hike, or a plane to board. Her resume consists of coroner, to working at a zoo, and most recently as an executive assistant, but finds her home amongst words, whether it be in books, or in film. Her obsessions are on the brink of bizarre, but that's just the way she likes it.


Giveaway:
a Rafflecopter giveaway
Posted by Malissa at 09:00