All Chained Up by Sophie Jordan - Review and Giveaway 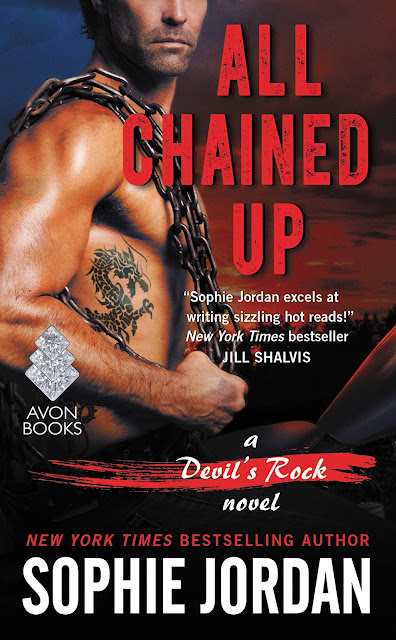 Some men come with a built-in warning label. Knox Callaghan is one of them. Danger radiates from every lean, muscled inch of him, and his deep blue eyes seem to see right through to Briar Davis’s most secret fantasies. But there’s one major problem: Briar is a nurse volunteering at the local prison, and Knox is an inmate who should be off-limits in every way.

Knox feels it too—a shocking animal magnetism that drives him to risk his own life to protect Briar’s. Paroled at last, he tries to resist her. She’s too innocent, too sweet, and she has no idea what Knox is capable of. But a single touch can lead to a kiss—and a taste . . . until the only crime is denying what feels so right . . .

I hate to admit it because it just seems so wrong because...well I mean just because, but this was my first Sophie Jordan read.  Her historical romances are all in my TBR and I think about them often but some how they're still there.  Then one morning a tatted up bad boy serving prison time crosses my path and I went all in...what that says about me I don't know but I won't regret my choices.  Well, maybe except that regret of seeing Sophie's other books sitting in my TBR pile, after this i can promise you they won't remain there much longer.

Briar Davis is determined.  She's determined to overcome her past, she's determined to be the best nurse she can be, she's determined to get the promotion...sounds all good right?  Well, until that determination leads her to being the only volunteer to help her family practice Dr. serve the prison community of Devil's Rock.  Briar knows what 'these men' are like.  She grew up with a violent father, she knows all 'these men' are just like or worse than him.  The world is black and white and while she's agreed to help in the prison clinic she knows that these men are nothing but monsters and she will just have to endure them, get out, and get that coveted promotion.

Knox Callaghan has spent his twenties becoming a hardened, ruthless member of a prison gang while serving out his sentence. He's been in eight years, he's learned how to survive, he's learned how to keep he and his brother (North) safe, he's learned that while he may not be a good man he isn't the monster the world sees him as.  He has four goals, survive, keep his brother safe, get released, and NEVER go back.  Then Nurse Davis walks into his world and while his goals don't change the world he lives in does.

I loved Knox, he is such a wonderful character.  He's not the typical 'bad boy', he's not running around with the machismo effect following everywhere he goes.  He's not a condescending ass that women in books fawn over and then either learn to accept and fall in love or manage to some how change him and fall in love.  No, Knox is a man with a strong moral center who has had to harden himself and his heart due to his circumstances.  He's a quiet man who will protect those he loves even if that means putting his own life on the line to do it.  He may look like a 'bad boy' with his build, his tattoo's, his prison reputation, but he is a really good man as the song goes.

Now Briar, Briar I really did like her but I have to say that her constant pigeon-holing of people did get a bit on my nerves.  I know that she comes from a past that affects her present and maybe the fact that I know Knox's background colors that opinion because her prejudice while understandable in the beginning begins to rub me the wrong way after in continues for so long in the story.  Other than that though I really like Briar, she may come across as a bit timid but in truth she is an incredibly strong woman who won't back down from what she knows is right and what she knows she wants.

Sophie does a beautiful job at fleshing out these characters and their relationships.  I loved that about this book.  There isn't insta-love, attraction absolutely, but the love between these characters is given the chance to build, the characters a chance to grow.  We are allowed to learn exactly who they are without all those gratuitous steamy scenes muddling their development.  The relationship between Knox and Briar feels real because it takes it's time and builds upon itself.  Don't let that keep you from reading if what you are looking for is a steamy romance though because guess what you get that too.  The attraction between Briar and Knox is intense and when they finally do come together, get your fans out readers oh and maybe before you start run out a buy a pint of Cherry Garcia....that is if you think you can handle it!  *WOW*

I also loved her secondary characters.  Well I loved most of them.  Briar's sister, yeah.  I mean I get that she isn't supposed to be a hero in this book, but even when she does the right thing I can't seem to let go of all the bad she did.  I just can't like her, which when I think about it makes me feel very much like Briar with her pre-conceived notions of all the men at Devil's Rock...guess I need to work not that, haha.  But, But!  North, Knox's brother!  Oh my heart, I am going to be so torn up over him I  know it.  I read this book several weeks ago and I am still worried about North and aching for his book, which is not next. *cries fat ugly tears of anxiousness and worry*  Then there is Reid, the leader of Devil's Rock biggest, baddest gang.  I am so ready for his story and thankfully for us his book is next, (Hell Breaks Loose) we get a wild introduction to his future toward the end of All Chained Up and it's going to be a crazy ride.  Even though we don't see much of Reid through out the book he is an integral part of the story and like Sophie's other secondary characters (and something she has done amazingly well in this book) I feel like I already know this man's character.  I know deep down what type of men Reid and North are, what we don't know is how they will handle the life laid out in front of them and that will have you coming back and invested in these 'bad boys' of Devil's Rock.

If you are a fan of Contemporary Romances, Dark Romances, MC based Romances, you will be a fan of The Devil's Rock series.  You'll be invested in this series after just the first few chapters of All Chained Up and anxiously waiting for more.  This was a wonderful introduction to Sophie Jordan for me and I can't wait for both more in this series and to dive into that TBR pile I talked about early to pull out her other books!

Giveaway:
3 Finished Copies of ALL CHAINED UP (US Only) 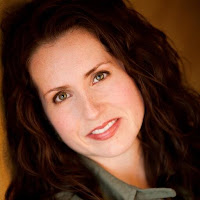 Sophie Jordan took her adolescent daydreaming one step further and penned her first historical romance in the back of her high school Spanish class. This passion led her to pursue a degree in English and History.

A brief stint in law school taught her that case law was not nearly as interesting as literature - teaching English seemed the natural recourse. After several years teaching high school students to love Antigone, Sophie resigned with the birth of her first child and decided it was time to pursue the long-held dream of writing.

In less than three years, her first book, Once Upon A Wedding Night, a 2006 Romantic Times Reviewers' Choice Nominee for Best First Historical, hit book shelves. Her second novel, Too Wicked To Tame, released in March 2007 with a bang, landing on the USA Today Bestseller's List.