Thrown Down by Tessa Bailey - Review

He has one last chance to deserve the girl of his dreams... Overachiever River Purcell was never supposed to be a struggling single mom, working double shifts just to make ends meet. Nor was she supposed to be abandoned by her high school sweetheart, breaking her heart into a thousand jagged pieces. Now Vaughn De Matteo is back in town, his sights set on her...and River is in danger of drowning a second time. No one believed Hook's resident bad boy was good enough for River. Not even Vaughn himself. But he'll fight like hell to win back the woman he never stopped loving, to keep the daughter he never expected, and convince himself he's worth their love in the process––even if he has to rely on their fierce and undeniable sexual chemistry. But even as River's body arches under his hungered touch, the demons of the past lurk in the shadows. Waiting for Vaughn to repeat his mistakes one last time... 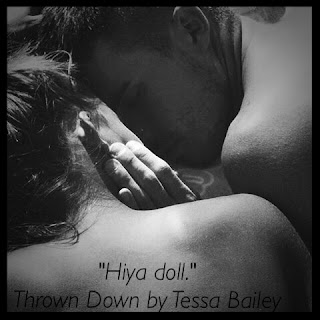 Forty-nine months and three days. That was how long it had been since he’d seen her. Vaughn swayed to the right, his shoulder slamming up against the wall. Then he kind of just hung there, counting forward and backward from one to ten. Not helping. Not helping. His stomach pitched at the sight of River walking through the drunks, like a nurse walking among the wounded on a battlefield. She could still knock his lights out on sight. Not that he’d doubted it for a second. But God, if it were possible, she’d grown even more beautiful over the last forty-nine months. Her blond hair was tied up in a ponytail, a pencil stuck through the base, in a way he remembered well enough to make his throat go raw. In a short black skirt and fitted white T-shirt, River tried to look the part of indifferent barmaid, but didn’t pull it off. Not by a stretch. Eyes Vaughn knew were just a shade darker than cornflower blue flitted to each table, and her fingers tugged on the skirt’s hem self-consciously every time she approached a new one. When she fumbled with the notepad, recovering with a nervous laugh, a choked sound left Vaughn. “Riv,” he whispered. She looked up so fast, he might as well have shouted. The sudden impact of having River’s focus on him after such an extended period of time without it released a rushing sound between his ears, blocking out the sad lounge act…and apparently someone asking if he needed a table. Because when Vaughn snapped back to reality, a man he towered over by at least a foot was in his face. Snapping his fingers. “I wouldn’t…” Vaughn shook his head to clear it, experiencing a resurgence of anger, this time for having his attention diverted from where he needed it to be. On River. “I wouldn’t advise snapping your fingers in my face again.” “Why’s that, huh?” A toss of blond hair snagged Vaughn’s gaze as his angelic ex-girlfriend zigzagged through the crowd, drawing more than just his notice. Ah no, quite the opposite. She was putting on an unwitting show for every man in the room, attracting lecherous looks by virtue of being her beautiful self, light in a dark tunnel, same way she’d always been. Finger snapped in front of his face. Again. “This is my place and I asked you a question.” “This is your place?” Vaughn asked. God, one hour back in Jersey and already his accent had thickened from water to oil. “You hired River Purcell to clean up tables?” “That’s right.” Vaughn plowed a fist into the underside of the man’s jaw, watching him fall backward onto the sticky concrete floor with detachment that slowly morphed into satisfaction. So much for calm, he thought, shaking out his right hand.

We were introduced to these two in the first Made in Jersey novel, Crashed Out.  River Purcell is sister to rocker Sarge and best friend to Sarge's love interest Jasmine.  Through them we get a good feel for who River is, hardworking woman intent on making it on her own, dedicated mother, sister, and friend.  We also discover the father of her sweet little girl Marcy, River's high school love Vaughn.  We also learn that Vaughn has no idea he's a father until a letter sent by Sarge send Vaughn rushing back to Hook New Jersey a place he left with the belief he was saving River, but instead left her alone and fighting to give their daughter the best life she can.

I love, LOVE this couple.  I love River's dedication to not only her daughter but to herself and her desire to take care of them both on her own.  She could so easily just let her brother care for her, she could have so easily let some man take care of her, but instead she fights to stand on her own two feet, to rely on no one but herself.  I love her drive to at least try to be the best in everything she does, to show her daughter that even though life can be hard, life can also be good but you have to work for it.    Vaughn, sweet, sweet, troubled Vaughn.  He's the kind of hero we need in books.  Heroes that hurt because they are trying to do the right thing.  Heroes that never leave you questioning their devotion to the person they love.  The hero that puts the love of his life first, even if it means breaking his own heart and shattering his soul.  The hero that will drop everything when he discovers that 'She' needs him.  It is so hard not to fall in love with this everyday, every city, every relationship couple.  They are each one of us, (maybe with a bit more sexy talk, haha) they live in a world where money isn't falling out of their pockets where they have to work every day, where they live pay check to pacy check.  They are the couple that says that in the end what matters most is the love for their little family and simply just doing the best they can.

I also throughly enjoyed the introduction of secondary characters, Duke and his sisters...oh how much fun we will have when their stories get told.  At first I honestly thought Duke's sisters were going to drive me insane but Tessa manages to take their wildness and make you fall in love with it.  They are going to keep Duke and the town of Hook on it's toes and I can't wait to see all the fun that occurs do to them.   Duke, he just makes you want to growl and purr all at the same time.  His book can't get here soon enough for me.  Then there's Mr. Three Piece Suit...Renner, all I can say is I am very VERY intrigued. There is one complicated story there and I can't wait to 'hear' it.

My favorite part about this book is how full my heart felt when I 'closed' the back cover.  When I just sat there for a moment basking in the glow of the love between this couple.  Yes there are sexy times, I mean come on we are talking about Tessa 'Queen of Dirty Talk' Bailey, she is one of the best out there when it comes to steamy moments and words that will make you need a high powered fan and I love those moments I really do, but with this book, this book just made me love love!  I absolutely loved the HEART of this couple.  When you are done if you don't walk away feeling like love is the most amazing thing in the world then we should talk, haha.

The only thing that has kept me from giving this a huge 5 love filled stars is that I would have liked more interaction between Vaughn and Marcy and then I would have liked a bit more in the epilogue.  I would have liked to see that they basically stuck it to River's father by getting EVERYTHING they have wanted, but maybe that's just because I have a vindictive streak, ha.  I am hopeful that in future books we will see that come to pass.  We will know that not only do they have the love they deserve but they have a house filled with that love.

This is a fantastic read for ANY contemporary romance fan.  If this is your first introduction to either Tessa or her Made in Jersey series you've chosen a great book to start with.  While Thrown Down is part of the Made in Jersey series it can be read as a standalone.  You will meet the couple from book 1, Crashed Out but you won't be spoiled if you want to go back and read it after you finish Thrown Down.  If you are looking for a book with characters that feel true to life, if you are looking for a book with steamy moments that will leave you gulping down glass after glass of water, or maybe a nice cold beer, if you are looking for a book that will leave your heart full and happy this is the book for you!

Tessa Bailey is originally from Carlsbad, California. The day after high school graduation, she packed her yearbook, ripped jeans and laptop, driving cross-country to New York City in under four days.   Her most valuable life experiences were learned thereafter while waitressing at K-Dees, a Manhattan pub owned by her uncle. Inside those four walls, she met her husband, best friend and discovered the magic of classic rock, managing to put herself through Kingsborough Community College and the English program at Pace University at the same time. Several stunted attempts to enter the work force as a journalist followed, but romance writing continued to demand her attention. She now lives in Long Island, New York with her husband of eight years and four-year-old daughter. Although she is severely sleep-deprived, she is incredibly happy to be living her dream of writing about people falling in love.