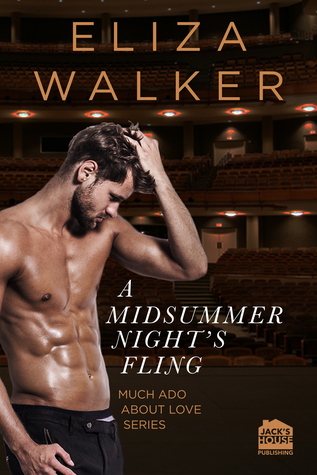 The show must go on, but the price of admission could be her heart.

Sick of her vagabond life in a Broadway touring company, Nicola is ready to settle down. She wants nothing more than to park her suitcase in California, put out feelers for local auditions, and leave her past firmly behind her.

Too bad her past comes knocking on her door her first day home. All six-foot-three, beautiful man of her past named Max. Stupid Max. The mistake Nicola just can’t seem to stop making.

Even before Nicola—fiery, quick-witted, beautiful Nicola—slams the door in his face, Max is in trouble. She will always be the one who got away. Three times. Which makes convincing her to play Titania to his Oberon a bit…awkward.

Though she has zero desire to re-re-rekindle an old flame, Nicola can’t turn down the chance Max is offering: a lead role with the West Coast’s premiere Shakespeare company. But when their first rehearsal kiss disintegrates into a passionate liplock, she’s questioning her sanity and tempted to jump ship—before Max can break her heart again.

Now it’s up to Max to convince her that the torch he’s been carrying is actually an eternal flame.

Oh the angst, all the angst.  I am actually not a fan of angst, angst in books makes me an angsty reader and you won't like me when I am angsty, but in some miraculous turn of events the angst in this book just plain works and it doesn't make me want to grab at my hair in frustration on curl my fingers around my book until I am on the verge of bending the cover.  Maybe it is because it's a story that revolves around the theater and we expect a certain angsty behavior out of these characters. Maybe it is just that the author so smoothly transitions from the angsty moments to the sweet, the sexy, or the playful.  All I know is that for once a book is full of angst and rather than crave tossing it across the room I couldn't put it down until I was finished and then I wanted more....

Nicola and Max were 'childhood' sweethearts, they were college aged lovers, they were engaged to be married, until Max walked away one too many times, until Nicola got too caught up in him and forgot about herself, until Max began to spiral out of control, and until Nicola walked away finally ending their relationship for good.  Five years have passed, a lot of hurt and heartache, a lot of poor decisions, and trying to forget but now Nicola is back from 5 years touring and Max is standing on her doorstep offering her a role she can't want but can't turn down.

Nicola and Max are not just the typical second chance romance, their romance like any Shakespeare play is meant to withstand a the test of time, it is a constant that is ever changing but solid in it's foundation.  Their's is a romance that is hard fought for and well earned.  I really enjoyed these two, even through their dramatics.  I felt for them, completely understanding each side, instead of my typical reaction which is to side with one character or the other.  I rooted for them and begged them inside my head to make the right choices.

In fact I fell hard for almost every character in this story, Lachlan, Peter, Cassidy, Tierney and even Isabella who on more than one occasion rubbed me the wrong way but in the end became the person I needed her to be.  I can't wait to have I am hoping each of those first fours stories and of course seeing more of Nicola and Max.  Eliza Walker does a beautiful job not only making these characters heartfelt and lovable, she seamlessly weaves the play into the story so you feel like you are truly sitting in the audience watching everything unfurl.  She takes these theater geeks and makes them not at all geeky when they start spouting sonnets in public and in their everyday conversations.  Being that I was never a theater participant unless I was sitting in the audience ( I am terrified of public speaking) I worried that I would get bogged down in a language I wouldn't understand or end up rolling my eyes at corniness, but that was not the case at all.  I was throughly pulled into and engrossed but the story and asI said above I can't wait to come back and immerse my self in this world again with future books!

If you are looking for a Contemporary Romance to sweep you away into an everyday world made just a bit more magical than this is a great choice. It is a fantastic book for a vacation trip and should definitely be on your summer reading list!

Eliza Walker, a native of Los Angeles, is the author of the Much Ado About Love Series that begins with A Midsummer Night’s Fling. Her experiences as an actress helped inspire the series about actors finding love amidst the bedlam backstage at a world-class repertory theater. Once upon a time, Eliza met her own wonderful husband when they did a play together.

By day Eliza helps corral engineers for NASA (without doing any of the tech stuff herself, of course). By night she loves to write her sarcastic heroes and heroines bantering their way to true love. Eliza is a total geek, a movie buff and a mediocre swing dancer. Eliza and her husband live in sunny Southern California with two of the neediest housecats on the planet.