I am so thrilled to help share the cover reveal for Rex,
by Adam Rocke, Mark Rogers, and
Cody B. Stewart.
Rex is a Middle Grade story being published by Common Deer Press and I am super excited about this story. 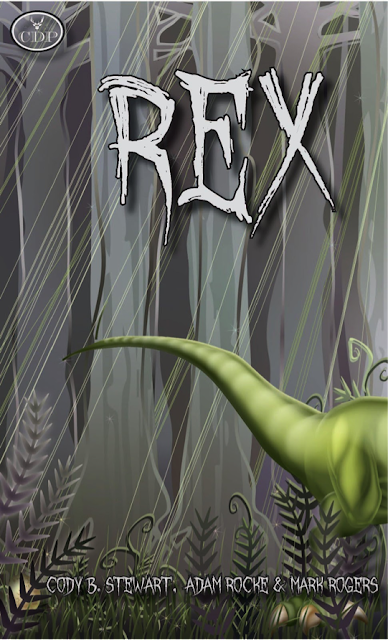 Cody B. Stewart was born in the Adirondacks, in Upstate New York. His love of stories began in those mountains as he vanquished trolls, fought in the American Revolution and discovered his latent mutant powers. Stories have continued to consume his life, but he now plucks them out of his head and puts them down on paper in the form of novels and comic books. He left the Adirondacks to grow into a man, did so, and has since returned with a wonderfully supportive wife and two sons.
Website ~ Twitter ~  Facebook

Adam Rocke Slutsky never met an adventure he didn’t love. From swimming with great white sharks without a cage, to jumping out of a plane without a parachute, Adam’s adrenaline junkie tendencies play a major role in his writing. Throw in a secondary degree in CryptoZoology and it’s anyone’s guess where Adam’s literary travels will take him.

Now that we've shared this awesome cover, we can't wait to share the book!

See you in October!