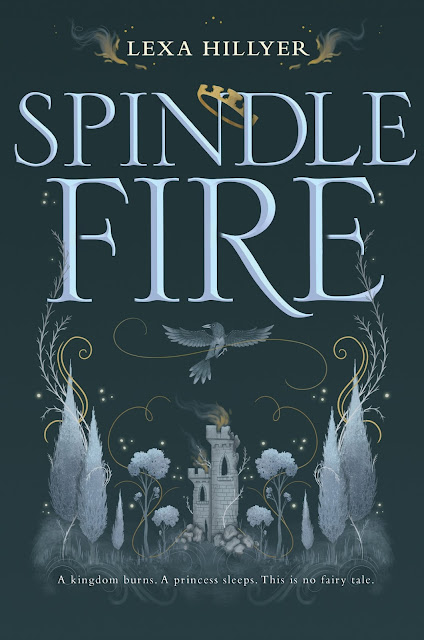 Half sisters Isabelle and Aurora are polar opposites: Isabelle is the king's headstrong illegitimate daughter, whose sight was tithed by faeries; Aurora, beautiful and sheltered, was tithed her sense of touch and her voice on the same day. Despite their differences, the sisters have always been extremely close.

And then everything changes, with a single drop of Aurora's blood--and a sleep so deep it cannot be broken.

As the faerie queen and her army of Vultures prepare to march, Isabelle must race to find a prince who can awaken her sister with the kiss of true love and seal their two kingdoms in an alliance against the queen.

Isabelle crosses land and sea; unearthly, thorny vines rise up the palace walls; and whispers of revolt travel in the ashes on the wind. The kingdom falls to ruin under layers of snow. Meanwhile, Aurora wakes up in a strange and enchanted world, where a mysterious hunter may be the secret to her escape . . . or the reason for her to stay.

Spindle Fire is the first book in a lush fantasy duology set in the dwindling, deliciously corrupt world of the fae and featuring two truly unforgettable heroines.

I was so seriously excited when this book came to my attention, I mean just look at that description: Sleeping Beauty, an until now unknown illegitimate daughter,  Faerie Queen(s), princes, true love....it was hard not to jump for joy and beg, BEG, to be put on this tour.  What you don't read but may see between the lines is the amount of action and adventure, the bonds that will be tested, the feelings that will be discovered (in more ways than one), the fear, the small happy moments that let two princesses struggling to do what's right, to save their world and each other, breathe.

Let's talk about the two sisters.  I was really excited and hopeful that we would get a book with strong sisterly bonds and kick arse female leads.  I was thrilled to see that Spindle Fire revolves around two, really four, female characters, the two princesses, Aurora and Isabella and two faeries, Malfleur and Belcoeur.  We get what I think we have all come to expect of the Fae, if you have ever read Sleeping Beauty or seen the movie re-tellings...they're both more than a little nuts and cruel and yet they weren't just born this way. It wasn't nature but nurture that develops these women into who they became.
Aurora is Aurora....she is the Aurora you expect her to be if she had never truly fallen asleep in the original story.  Kind, queenly, beautiful, a bit impatient, proud, (but not overly) and determined to save her kingdom even if she isn't sure how.
The one who will surprise you and I suppose it isn't any surprise at all is Isabelle, (who often goes and Isbe and who I still call Isabelle because I am not quite certain how that is supposed to be pronounced, Is-be?) her life began with her questionable heritage and honestly while pampered her life still felt as though perhaps she was brought over from Cinderella.  While her sister Aurora clearly loves her and they have a strong bond, she was never thought of as more than the king's illegitimate child. Even the king and queen (can we say petty and selfish...I was really disappointed in that) use her and consider her a throw away.  Having her sight taken from her as a child she never lets that handicap her and in fact uses it to her advantage by honing her other senses.  She, being the child of a kingdom that never really cared whether she lived or not, except for the tithe she paid for her sister, is going to be the one to save it and I love that about her.  I love that she is able to look past her personal pain and 'see' that she has the power to fight for and protect her sister and her home.

Onto the secondary characters.  I have some pretty mixed feelings here.
Heath, he's the bad boy of the group and completely bi-polar, which is explained by the 'are you real or aren't you' problem, but he still makes you want to shake him.
Wren, I don't know exactly what is up with this girl, I mean I know...but she feels a bit like the fake female friend that I hate and I really hope that isn't how things play out.
Gilbert, dude...do I cry for you, do I shake you senseless along with Heath and tell you to man-up, you are giving me the most angst out of everyone!
William, sweet William...I kinda really like you, I think.  You are a tad obliging perhaps, maybe there is a bit of something going on in your mind that you aren't sharing with anyone else...what exactly do you expect to get out of all of this, oil? But I think I like you and I  am going to be exceedingly sad to see your heart get broken so I can't let myself like you that much, you know just in case.

Now a few complaints, sorry....as much as I want to shout that this book is perfection there were a few things that made it 4 stars instead of 5 for me.  First, this is a heavily descriptive book.  I realize that with the start of a new fantasy series the world building is going to be detailed in the book, but there were times were I was completely bogged down into the mire and minutia, it felt a bit exhaustive. I feel like we could have lost a good 50 pages with a tad more editing.  Second, I wish we had been given more time with the sisters.  I loved seeing them become the women they do as they fight to save each other and their kingdom, but while we know they have a strong bond I feel like the short time we got with them together in the beginning of the story doesn't fully set the tone for who they are to each other, in fact, there is a lot of back and forth at times on whether they even really like each other.  Third, each chapter is a different voice.  The chapters bounce back and forth between the sisters and the Faerie and it can get frustrating.  I love seeing what each sister is doing from her own perspective and that would have been enough but sometimes having the Faerie's thoughts and doings and the occasional random Fae thrown into the mix makes you want to reach through the pages and just tell them to stop for a minute.  Especially when it comes to Belcoeur...her moments are pure madness which is perfect for her, not so great for you the reader when you are trying to grasp what all is going on.  That leads me to Fourth...there is A LOT going on in this book. Four plus points of view, an extreme amount of world building, two, count them two separate love TRIANGLES, mystery, magic, intrigue, plots....it is jammed pack with a ton of information. Which is about how I feel about my review right now.

It's hard not to wax on and on about this book because there is simply so much to talk about.  The good for me totally out weighed the bad making it four stars and wishing hard that I could have given it five. The strength of the sisters, the bonds, the new take on an old favorite that really hasn't gotten it's due until now, the action, the adventure, the world....all of these pieces come together and make a wonderful story, I simply wish in the end that perhaps the editor had gone a bit more heavy with their red pen.

Until recently with my discovery of YA fantasy I have never been a huge Fantasy reader, I am not a fan of JRR Tolken, or Terry Brooks, but I have slowly started to fall in love with this genre through authors like Leigh Bardugo, Sarah J. Maas, and Taran Matharu, and I think that this series has amazing potential.  I am looking forward to seeing where Lexa Hillyer takes us.  There is an epic journey to be had and two female characters that could take the fantasy world by storm!  I will definitely be picking up book two and heading back into the world of Spindle Fire!

P.S.
Reading this book was beautiful but as an audio book listener as well as reader, I think that listening to this book would be amazing. I think being able to completely immerse yourself into the world, to close your eyes and just allow it to play out behind your eye lids would only enhance this story. You won't regret reading this book the 'old fashioned' way, but hey if you have an Audible credit laying around looking for the perfect book, this may be the one.  Sidetone: I have not listened to this book, I do not know the narrator that was used so I can not testify to the narrators skill, I just know from reading it and how the entire book is woven it would make a beautiful story to simply hear and feel.

Giveaway:
3 Finished Copies of SPINDLE FIRE (US Only) 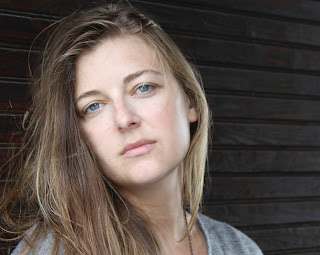 Lexa Hillyer is the co-founder of Paper Lantern Lit, former YA editor, and author of Proof of Forever. Lexa is also an award-winning poet: Her first collection, Acquainted with the Cold, won the Melissa Lanitis Gregory Poetry Prize as well as the 2012 Book of the Year Award from ForeWord Reviews. Her poetry has been anthologized in Best New Poets 2012, and has appeared in several journals. She lives in Brooklyn with her husband and their daughter.