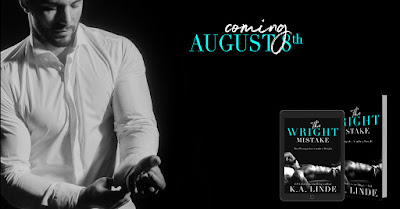 I spent six weeks screwing Austin Wright’s brains out and all I got was this broken heart.

He can’t be trusted. Not with my body or my heart. Yet, two years have passed and I still crave him like an addict needing a fix.

The last time we tried this, it nearly ruined me. I know I should run and never look back. But his dark haunted eyes and razor blade smile speak to my soul. His touch sets my body on fire. And we all know what happens when you light gasoline. Someone is bound to get burned.

Because everyone knows two wrongs don’t make a Wright.

If you have read any of the other books in the Wright series you have been waiting for this book, you have also known that this book would be an emotional one that would take it's toll on your wine or tea socks and your tissue boxes.  I have to say even though I was prepared I was still not prepared enough.  The emotions that come out of this book are palatable, they're ugly, they're hard.  Yes, The Wright Mistake has all the laughter and romance you expect from this series, but it has some truly difficult moments too and not just for our hero who is more lost little boy than man, (emotionally anyway) for a good part of this story, but for the entire Wright clan.

"Not caring about someone would mean forgetting them, and we both know that neither of us are forgettable."

"I wish I could forget you."

The Wright Mistake is an almost second chance romance.  It is but the couple had only been together six weeks previously and while they're relationship was explosive during that time to call it a true second chance romance doesn't seem quite right.  Their earlier time together was based on lust and mutual attraction, when these two comeback together it's a story of discovery and healing.  Julia absolutely got her heart broken the first time around but that was based more on the idea of the relationship, on what was hoped for instead of what was really there so in that sense I just want to shout out RE-DO and almost forget that they had that first six weeks.

I really enjoyed these two characters individually and together.  I loved Julia's spirit and tenacity.  I adored Austin for his soul. A soul that is broken and abused but that shines through with love for his family even while he tries to dim it through his addiction.  Austin is a functioning alcoholic who is clearly depressed and lost.  He craves love and has a need to punish himself for things the world that he can't control.  It was clear to me that through every thing men his denial he is crying out for someone to pick him up and make him okay.  I have been quite sad while we waited to get to his book watching his family, knowing they saw his problems and chose to essentially ignore them.  While I love that he ultimately worked things out on his own, and that they stood with him ( I always knew they would) I wish they had been more forceful in trying to get him to that point sooner.  Perhaps that is my naivety however because as we all know the addict has to want to help themselves if anything is going to be accomplished successfully.

Together Julia and Austin are fire and ice.  They burn of the pages, but until they can come together in honesty and understanding their moments of scorching heat are quickly doused with the cold reality of mistrust and secrets.

I will say that this one, The Wright Mistake, is my favorite so far in this series and I know that leaves you scratching your head at my 4 star rating.  There is a reason for that and one I can't get into deeply due to spoilers.  I will say that something occurs in this book that I am unsure was necessary.  Now that's easy for me to say as the reader, I get that.  As the author this was the direction K.A. Linde's characters took her, this is what they spoke, but it saddened me, (in an already very sad book) even seeing it coming from a mile away when a new introduction was made. There was only one thing that could happen but I wish it hadn't.  I wish the characters could have been happy where they were, that we could have been happy.  I......ugh, I have so much to say about this one thing that sort of drowns out everything else for me in the story and yet I can't really say any of it.  So what I will say is go read this book then come back here and talk to me.  Let me know what you think, I see this as a great future debate and there will be a lot of conflicting emotions on that particular portion of the story.  \

I loved Austin and Julia's story.  It will an emotional and thought provoking journey.  We know the Wright's aren't perfect but Austin's story will open our eyes to exactly how flawed and how, human this family really is.  Sure they are all hot, sexy, rich, fabulous book boyfriends and girlfriends but they are just 'humans' looking for the same thing every human wants, love, family, friendship.  It's wonderful to watch them get it while overcoming histories, challenges, and heartaches.

I would not call this book a stand-alone even though I don't feel like you would be lost if this is the first one you pick up in the series.  I say it isn't a stand-alone because I think you need to see Austin for who he is fully and you can only get that by seeing him in his brother's stories.  I have thoroughly enjoyed this entire series to date and if you are a contemporary romance fan this series should be at the top of your TBR pile.  You will not regret shoving some others down a bit lower to make room for the Wright series!

K.A. Linde is the USA Today bestselling author of more than fifteen novels including the Avoiding series and the Record series. She has a Masters degree in political science from the University of Georgia, was the head campaign worker for the 2012 presidential campaign at the University of North Carolina at Chapel Hill, and served as the head coach of the Duke University dance team. She loves reading fantasy novels, geeking out over Star Wars, binge-watching Supernatural, and dancing in her spare time. She currently lives in Lubbock, Texas, with her husband and two super adorable puppies.