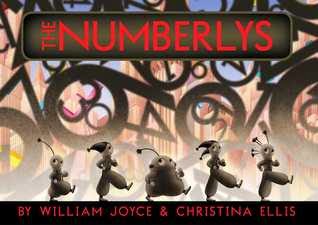 Once upon a time there was no alphabet, only numbers

Life was fine. Orderly. Dull as gray paint. Very numberly. But our five jaunty heroes weren't willing to accept that this was all there could be. They knew there had to be more.

So they broke out hard hats and welders, hammers and glue guns, and they started knocking some numbers together. Removing a piece here. Adding a piece there. At first, it was awful. But the five kept at it, and soon it was artful! One letter after another emerged, until there were twenty-six. Twenty-six letters - and they were beautiful. All colorful, shiny, and new. Exactly what our heroes didn't even know they were missing.

And when the letters entered the world, something truly wondrous began to happen: Pizza! Jelly beans! Color! Books!

First off let me say that when I got this book in the mail I went to total mush over the cover (you all know how I love a good cover), I adore the illustrations but love LOVE how the cover has depth and dimension to it.  Using a transparent jacket over the hard cover gives it an almost 3D like feel to it.  I have to admit that I love keeping the cover jacket slightly off center so I get the full effect.  Also I should note that William Joyce is one of my all time favorite Children's Authors and I think that every home with or without children in it should have at least one William Joyce book.  :-)

The Numberlys starts off in a grey dystopian world, where everyday is the same dull day,

"But there weren't any books or colors or jellybeans or pizza.  Only 00267, which was thick and gray and gloopy, and 00268 which was thicker and grayer and , well.....gloopier."

and then 5 friends get an idea, an idea that maybe somehow they can make things better, but how and with that the adventure begins.
I adore the illustrations, the characters are so full of whimsy and joy.  William Joyce could tell an entire story with through only his pictures.  Although at first I was thrown off by the book being read vertically (just wasn't expecting that when I turned the first page, haha) neither my daughter or myself were bothered by that or that on some pages you had to turn the book.  In fact there is no way the world that William Joyce created could have had the same impact if the book had been drawn horizontally and it is a bit of a poke at the dull gray of the Numberly's world, it's a bit of unusual in what is supposed to be a boring and typical place.

Now I am a letter girl, I am a historian and a book nerd, my life revolves around words, but I know that my number loving husband was a bit down on the fact that this book starts out making a world of numbers look boring and monotonous, but I think what he failed to consider is the fact that the ONLY way the five friends could make the world more colorful with words was by using numbers.  Every letter they created started with a number.  William Joyce is not trying to say that numbers are less important than words, not in my opinion at least.  He's trying to say you can't have one thing with out the other.  That we need numbers to make the world go round, but we need letters to make it stand out just a bit more.  I think that is the important thing to take away from this book, don't look at it and say "Ah, another number hater!" and tell your children "that it isn't right because a world of numbers is fun and exciting, that you don't need letters to make it so."  Remind them that you need both, that the inventions the Numberlys created started with numbers, that they would never have had all the color and beauty if they didn't find a way to incorporate both numbers and letters together.

The best part of this book for me is that it is a story of looking outside of your box, of finding a way to make things better, to stretch your imagination, to use your talents, to look for help from others and not think you have to do it all alone, and most importantly to not give up!  That is a strong theme in my house, learning to not get frustrated and walk away but to maybe sit down and think about a different way, there is no one right way, but if you give up you will never find that out.

As my 5 year old said when we got to an important milestone in the book.

"Oh My Gosh, they did that all by themselves?  That's amazing!"

This is a fun, interactive read and the art work will suck you in.  There is so much to look at, so many little things you might miss on your first go through.  Read this one over and over with your little ones and point out all the great things going on around these five friends as they discover a whole new world! 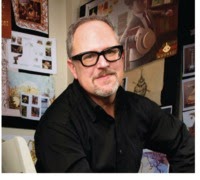 William Joyce does a lot of stuff—films, apps, Olympic curling—but children’s books are his true bailiwick (The Numberlys, The Man in the Moon, Nicholas St. North and the Battle of the Nightmare King, Toothiana, and the #1 New York Times bestselling The Fantastic Flying Books of Mr. Morris Lessmore, which is also an Academy Award–winning short film, to name a few). He lives with his family in Shreveport, Louisiana.