The Madness of Lord Westfall by Mia Marlowe - Review 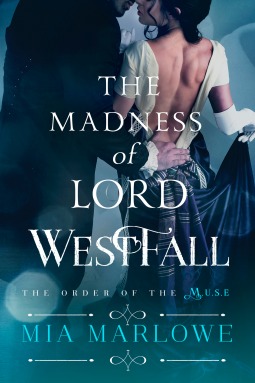 Author: Mia Marlowe
Publication Date:  21 Spetember, 2015
Publisher: Entangled Select
Series:  The Order of the M.U.S.E., book 2
Genre:  Historical Romance,ParanormalAge Recommendation: 17 and up
Rating: 4 Stars
~ I received a copy of this book in exchange for an honest review ~

He thought he knew madness... until he met her.

Pierce Langdon, Viscount Westfall is mad. Everyone knows it. He fell from a tree when he was a boy and woke to hear strange voices. When the voices grow stronger as he grows older, his family commits him to Bedlam. But what he hears are the thoughts of those around him-a gift to be used in service to the Order of the M.U.S.E. Until he falls again...this time for a totally unsuitable woman.

Lady Nora Claremont hides her heartbreak behind the facade of a carefree courtesan. Viscount Westfall is the most confusing man she's ever met. He seems to know exactly what she wants...and what she's thinking.

Which is a dangerous thing, because what Nora wants is Pierce. And what she's thinking could expose her as a traitor to the crown...

This is a genre that I honestly do not read enough, especially considering my education is as a Historian, but I am very glad that I requested this book when it came to my attention.

I immediately fell head over heels for the main characters in this story.  Lord Pierce Westfall, is so well developed and his story so heart breaking that you just ache for him.  Lady Nora Claremont's story is just as tragic and compelling.  Even from the first few chapters you are already rooting for these two and praying that they get their HEA.

I loved the paranormal aspect and how the cast of characters are using their gifts, I do wish we had gotten more court intrigue where this story is concerned but I know if we had the book would likely have ended up being twice as long because there is no way you could cut out any of the romantic or personal development aspects.  The challenge is that we know what and why of the story, but we don't get the detail into it's background.  We hear all about 'Prinny', the Prince Regent but never meet him, never enter into his court, or understand truly anything about him and considering the story ultimately revolves around possible treason against the crown having more detail in that area would have made this a 5 star for me.  Now, keep in mind what I mentioned earlier, I am a Historian by education so this may really just be an issue of me loving history so much that I just want it all, lol.

I thoroughly enjoyed the intrigue and suspense, the small twists and turns kept me flipping pages just as much as the romance did.  And Lord Westfall does the most amazing thing for Lady Nora, it will make you gasp, cry, and swoon.

There aren't many details I can give you about the book because so many of the details tie into the plot and I don't want to spoil anything for you, but know that this is a wonderful book about finding peace with ones self whether that is due to the choices you have made or the choices that have been made for you.  It is a interesting peep (and I say peep because the author only just scratches the surface) at how mental illnesses were treated in the 19th century and in particular at England's notorious Bethlem Royal Hospital or Bedlam as well as an interesting look into the workings of the Ton and how they treated those who were shall we say outside of their comfort zone of what they considered respectable.

This is a great read for anyone who is a fan of Historical Fiction with a paranormal bent.  This is the second book in the series and while you won't be completely lost, particularly the farther in the book you get, because the main focus of the book is the main characters relationship there are moments you will realize that you have missed something if you didn't read book, The Curse of Lord Stanstead. It could however be read as a stand-alone especially since after much misery and turmoil for the characters we the readers get our HEA. 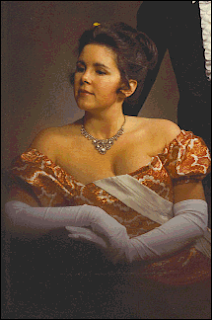 Mia learned much of what she knows about storytelling from singing. A classically trained soprano, she won the District Metropolitan Opera Auditions and has shared a stage with Placido Domingo. As she prepared for operatic roles, she devised back stories for her characters. Since she’s worn a real corset, and had to sing high C’s in one, she empathizes with the trials of her fictional heroines. But in Mia’s stories, they don’t die in a Parisian garret. They get to live and keep the hero!

Pictured at left: Mia as Rosalinde in Die Fledermaus