Under His Skin by Stacey O'Neale - Review 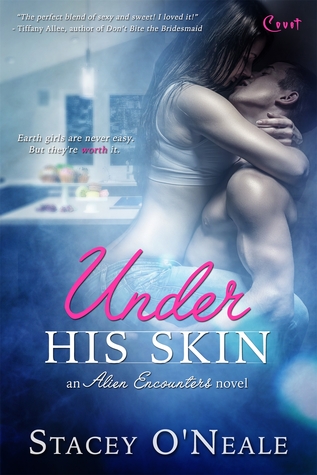 Earth girls are never easy. But they're worth it.

Bakery owner Annabelle Sparks' business is booming ever since she won reality TV's Cupcake Wars. The one thing deflating her happy soufflé? The extremely sexy Kaden Chance only sees her as a best friend-and Annabelle wants so much more. After waiting a year for him recognize their chemistry, she's giving up and dating other people.

What she doesn't know is Kaden's heart doesn't actually beat. He's not human. Heck, he's not even from Earth. To retain his intergalactic immunity, no one can ever know he is an extraterrestrial. But when Annabelle starts dating, something strange happens to Kaden's unmoved heart: it begins to beat. Now he faces an impossible choice-tell Annabelle the truth and be deported-or lose his last chance at love.

I was so excited when I was given the opportunity to review this book.  I fell in love with Stacey O'Neale after reading her Young Adult series, Mortal Enchantment and was thrilled to find out that she would be trying her had at Adult Romance and even more so when I discovered it would be a story revolving around 3 alien brothers.  YES!

This is the story of three brothers who had to flee their home planet as it destructs around them.  They have lost their planet, their people, their families and have to learn to assimilate into a new culture when they land on earth.  All three Chase brothers have found their own human personality, Kaden, is the 'Patriarch' of the family.  He's the oldest, the worrier, the rule keeper (which will lead him into quite the conundrum), he is the base of the family.  Hayden is a typical middle child in that he isn't the focus in this book.  While he play s a pivotal role we hear and see very little of him.  He's the science geek, the quiet brother working behind the scenes.  Then there is Camden, youngest brother, wild child, rule breaker, cad about town.

Annabelle Sparks is the owner of Yummy Bakery is a busy as ever after winning Cupcake Wars and bringing attention to her small Germantown, MD bakery.  Every thing in her professional life is falling in place, but in her person life she's floundering.  She secretly has feelings for Kaden, who she has been friends with for over a year.  She's always found him attractive but afraid of loosing his friendship that has come to mean so much to her she's tried to keep those feelings tamped down, somewhat unsuccessfully.  She's tired of being alone though and if Kaden won't step up to the game and ask her out, despite the simmering heat between them she'll have to push dreams of him aside and start looking for love in other places.  With the help of her best friend Hilary, she sets out to find a date and maybe, if Hilary has her way, spur Kaden into action.

I loved all the characters in this story and Stacey does a really fantastic job of fleshing them out and bringing life to them.  I felt like I could easily be friends with this group of people, even Hilary and Camden who can be a bit of an overwhelming presence at times.  They are both larger than life and I can't wait for their story, it's going to be wild.

I was reminded of Jennifer L. Armentrout's Lux series as I read this, so if you are a fan of that series you will enjoy this sexier 'adult' read.  I thoroughly enjoyed the action and suspense and of course the romance.  I am glad to say that while this would be placed into a Sci-Fi category, it won't overwhelm you with facts, Stacey gives us just enough detail about the alien planet and people to help us understand the story, but not so much that it drowns out the rest of the story, mainly the building romance between Kaden and Annabelle.  I can't say much about this with out giving out spoiler-y info, but I love that we get to see how the loss of their home planet and 'presumably' all of their people has affected the boys and the story.  It is clear that we will be seeing more of the FBI and perhaps more aliens, i.e. more intrigue.

This is a pretty quick read, one that you will not want to put down, one that you will fall in love with as you learn more and more about the Chase brothers.  This is a fantastic read for any Sci-Fi fan that is looking for a bit more romance in their read, it's perfect for Contemporary Romance Fans, NA fans, Adult Romance, and Paranormal Romance fans.  I know like me, once you read this book you will be so ready for the next ones.  I have to say I am already disappointed that this is likely a trilogy, because I think I could keep getting lost in this world for quite some time! 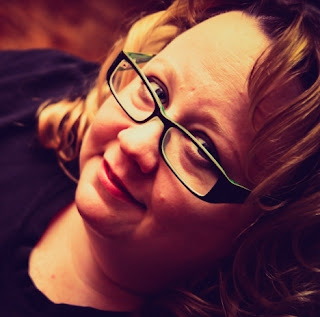 Award-winning author, Stacey O'Neale, lives in Annapolis, Maryland. When she's not writing, she spends her time fangirling over books, blogging, watching fantasy television shows, cheering for the Baltimore Ravens, and hanging out with her husband and daughter.