For His Eyes Only by Lexi Blake - Review

I was so glad when this book came across my desk.  I was late the the Masters and Mercenaries game just starting the series this last year, but I have devoured everyone and was throughly disappointed when I had caught up.  I don't binge watch TV, I binge read books and this is a series I couldn't put down, even when there were a few misses for me.

Nick's story is one I have been waiting on for quite some time, I knew that his history was going to be troubling, I just didn't realize how much pain I would feel for him because of his past, particularly his past with Des.  Des...that woman.  I don't know the I will ever be a be able to reconcile my feelings for her, I don't think she could have ever done enough to redeem herself, which is a hateful thing to say I know considering she is dead.  She caused a lot of heartache and pain and none more than to Nick and Hayley.

Nick has seen too much of the world and Hayley is to naive to it all but together they make perfect sense, they are the piece that each other is missing and I loved this couple even when they were thoughtless with their words...and they were, a lot. I mostly enjoyed watching them grow and accept one another.  They're past is both beautiful and sad, letting go of the pain while keeping the beauty is a huge hurdle for these two and Hayley growing into the women she ends up being is as wonderful as the love between her and Nick.  She goes from a naive woman with preconceived and notions to a woman who is strong, independent, understanding, open.  Nick in turn learns to accept that his past will always be a part of him but that it doesn't define him. That little bit makes me laugh in a way because we have Hayley the History Professor (High Five to all the history nerds out there) in love with a man who has to learn that in this case history doesn't have to repeat itself.    I loved that these two gave me a Pride and Prejudice vibe.

Lexi Blake's characters are always so well developed.  Even in the past when I have struggled with a character I have never misunderstood where they were coming from, how they became the person they are, or the reasons for their choices.  She takes great care in giving us characters with depth and development.  Nick and Hayley are no exception.

I loved being back at The Garden, seriously can some one create this because I would love to see it in real life.  I have images of the rainforest in the middle of a warehouse style building.  The way Ms. Blake describes it I can almost smell the flowers and hear water dripping.  I want to live there.  I also loved that past characters take on large roles in this story.  Ian is back and as saucy as ever, I am always so happy when he has a big role which I always find hilarious because I didn't really like him in the beginning. Lexi is always building the next story to come as she writes each book, I can't imagine the amount of 'fact checking' she has to do to keep up with all the details and get things just right.  I think I'm going to start a series bible, I don't know how she does it.

I am more and more intrigued by the Lost Boys and Ezra Fain and holy heck the Epilogue!
So you need to know that I never read excerpts from books that aren't already out because I hate waiting and knowing what is coming just makes the waiting even harder but I love a good epilogue.  What I don't like is a preview of the next book in the series disguised as an epilogue (for the reasons I mentioned above, haha) and Dag Nab It, that's what happened here and that chapter, OH MY HEAVENS what is coming our way for Blake....I wow!

This is a fantastic addition to the Masters and Mercenaries series, if you are a fan you aren't going to want to miss it.  If you have not read this series before please do not start here.  Go back to the first book.  Each book builds on the next, it's beautiful the way Lexi Blake builds this world book by book and that keeps it in one of my top favorite long running series spots. 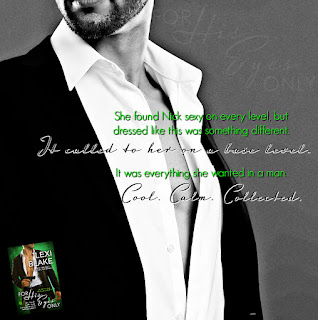 Nick went back to staring at the report. “Hayley’s not mine. She was Desiree’s cousin. Now she’s my client.” Who had been tired the night before and that was why she’d said the things she’d said. This morning she’d seemed much more sensible. After she’d had some sleep and a shower and had straightened herself up, she’d been quiet and seemingly reflective. She was very likely embarrassed by what had been said the night before. I would get safety from murderers and I would get orgasms. I’m sorry, Nicky, you’re going to tell me how that’s a bad deal for me. He was going to make sure she understood that his protection wasn’t based on whether or not she slept with him. Because he wasn’t sleeping with her. He couldn’t hurt her that way again. “So she was your old lover’s cousin,” Owen mused. “The lover you weren’t exclusive with and who wouldn’t marry you. The pretty girl who looks at you like you’re the sun in the sky is her cousin.” “She looks at me like she would look at man who can save her.” “I can save her.” Owen’s eyes lit up, his brows waggling. “Maybe she’ll look at me like that.” Anger flared through his system. “Don’t you dare. I told you I would take care of her.” His arms crossed over his big chest and Nick knew he’d been had. “Well, that answers the question with more honesty. You can pretend, but you like the girl. And if you honestly don’t then you need to know that the boys got a good look at her last night. If she’s going to be hanging about, she should be ready for some serious male attention.” “What are you talking about?” “The lads talked it over last night and decided there’s no dibs on this one. They all saw her at pretty much the same time. They looked over that dead body and saw her walking in the hall and that was when the fighting started. We all sat down and decided no dibs on her. She’ll get to pick. You should know that Sasha and Jax have decided if she picks either of them, they’re willing to share. I don’t play that way. That’s something I do know about meself. No need for you to be telling me that tale. If there’s going to be some sharing in the bedroom, it’s going to be the traditional kind between a man and a woman and her stacked best friend. That’s what I say.” “You tell those boys to stay away from her or they will be dealing with me. They will not like to be dealing with me. I will put up with many things from them. They can poke all the corpses they like. They can punch each other. I do not care. They touch Hayley and I will be caring.” “Wow, now you do sound Russian. A scary Russian. Still, I think if you don’t want the girl, shouldn’t she be allowed to choose? Think about it. It could be fun.” “Are we talking about the lost boys and their battle for the new chick?” Kayla strode in, her hair in a high ponytail. It bounced as she walked, a testament to her seemingly ever-sunny personality. “I had babysitting duty last night and they kept talking about her even after lights out. Bad boys. I had a plan though. I think we make them compete in a beauty pageant. Hayley gets to judge.” “I’m judging a beauty pageant?” Hayley followed behind Kay, and both women were followed by Charlotte Taggart and Penelope Knight. It looked like Hayley was rapidly being accepted by the women on his team. That was not necessarily a good thing. The women on his team could create chaos like no others. “That sounds like fun,” Charlotte said with a smile. “I think we should require Speedos for the bathing suit competition. No boring board shorts. If Hayley’s picking a lover, she needs to see some booty.” Hayley stopped, her cheeks going the sweetest color of pink. “Wait. What?” Penelope put a hand on her arm. “They’re teasing you, dear. Don’t worry about it. The lads will be very polite. Though you should expect some suitors while you’re here. Especially if you come down to the dungeon.” Now he was the one flushing. “Excuse me?” Hayley shook her head as she joined him at the table. “It’s nothing. I was just talking to the girls. Did you get the report? Penny said the Dallas office had found something.” He was all too aware that they weren’t alone. Damon and Ian walked in with Brody Carter and Walter Bennett. The four men settled into chairs as the women joined them. Nick held out a chair for Hayley. He would have to remember that he couldn’t leave her alone for a minute or someone would be whispering in her ear, giving her ideas she shouldn’t have. Like visiting The Garden on a play night. It wasn’t happening.