You Send Me by Jeannie Moon - Pre-Order Alert, Giveaway, and Excerpt

In YOU SEND ME, Jordan and Nick must let go or their separate pasts in order to seize their future together in this charming fake engagement romance.
Fans of Susan Wiggs and RaeAnne Thayne have fallen in love with the Compass Cove series from International Bestselling Author, Jeannie Moon. 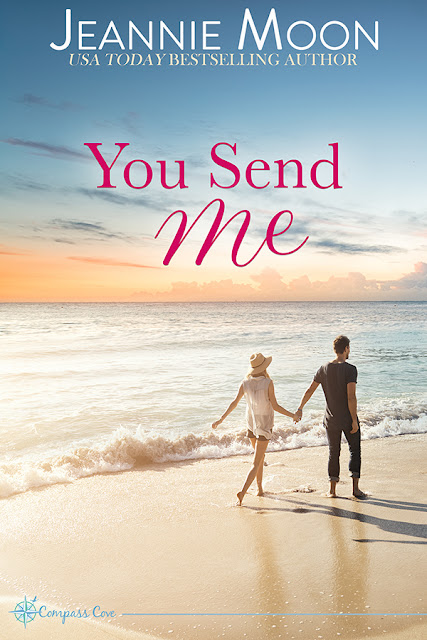 Jordan Velsor didn’t want to need anyone. After dumping her cheating fiancé, caring for her sick dad, and nearly being crushed along with her car during a violent storm, she’s pretty much at her breaking point. If anyone needs some luck, it's Jordan, but the last thing she wants is gorgeous Nick Rinaldi, her landlord’s grandson, hovering over her while she nurses a bad cold. The wounded Navy doctor seems too good to be true... which means he probably is.

Nick Rinaldi left the Navy broken and adrift, wondering if he would ever practice medicine again. When his grandparents' tenant is almost killed by a falling tree during a storm, he discovers Jordan is not only in shock, but suffering from pneumonia. Not one to miss an opportunity to play white knight, Nick arrives at her cottage to take care of her during the storm... But the lovely teacher has a fierce independent streak, and as he learns more about her, he wants to do more than merely help.

Can Jordan and Nick let go of their separate pasts and seize their future together? 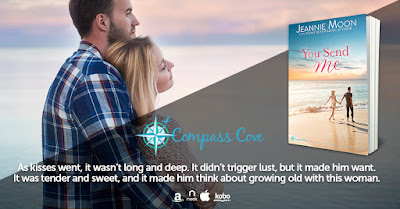 The deep rattling cough woke her from a restless sleep. This cold was kicking her ass, but even though all she wanted to do was burrow under the covers, she was out of tissues, and the dog needed to go outside.

Glancing out her window, the weather had worsened. She almost would have been content putting out a pad for Gertie to go inside, but her tissues and cough medicine were in the back seat of her car. She had to go out regardless.

With a whimper and a moan from her spot at the other end of the couch, her little rescue buried her face in the corner. Gertie was no dummy.

“Look, if I have to go out, so do you. Your bladder is the size of a thimble, and it’s going to get even worse later.”

The dog sighed—sighed her annoyance at Jordan. A dog with an attitude. Didn’t it figure? Gertie practically rolled off the plush cushion and settled on her back on the blue patterned rug. Her short little legs were straight up in the air, feigning death.

Jordan felt pretty dead herself, but they still had to go outside.

The wind howled, and all the windows in the cottage shook like it was going to lift up and fly away. Gust after gust provided a not-so-subtle reminder that the nor’easter currently blowing across Long Island was going to make all their lives miserable. This storm was brutal. It had been wreaking havoc for the last twelve hours and based on the latest weather report it had slowed down to a crawl, meaning it was going to stick around for a while.

Grabbing the dog’s leash, Jordan gently nudged the little furry blob on the floor. Nothing. She didn’t budge. “Gertie! Come on!”

Ninety-nine percent of the time, she loved the little mutt. This moment definitely fell into the one percent.

After she broke her engagement, Jordan had the sudden urge to have a pet. A lot of people told her it would pass, but she knew that wasn’t the case. Jordan needed unconditional love in her home, so she kept her eyes open for the right opportunity. She couldn’t handle a puppy or a kitten, so when she wandered around a rescue fair one Sunday this past September, she found herself completely enamored with Gertie. A stubby-legged little mutt, Gertie was a tube of golden fur with a pointy snout and big, soulful brown eyes. She was about five years old, and her owner had just died, leaving the little dog all alone.

Jordan felt a kinship with the pooch, and took her home that day.

Lina Rinaldi, who usually frowned on her cottage tenants having pets, took to the dog right away, and Gertie loved the older woman right back.

As Jordan stared at the lump still upside down on the floor, she was about ready to offer Mrs. Rinaldi full custody. Then a deep, rasping cough shook Jordan to the core. It racked her body violently, and pain shot around her chest. God, she felt awful.

“Come on,” she said firmly to the pooch. “We’ll skip the leash this time. Out and in. Let’s get this over with.”

Gertie rolled over and trotted to the front door, giving Jordan the side eye as she waited. Donning her parka and a pair of lined wellies that she pulled over her pajama pants, Jordan grabbed the remote and unlocked her car. When she opened the front door, she was hit by a blast of wind, rain, and sleet that stung her cheeks and chilled her to the bone. “Lord, it’s miserable.” Looking down at Gertie, she nodded. “Okay, let’s make this quick.”

The two of them bolted outside, with Gertie heading for her favorite patch of grass and Jordan heading for her car. She stopped when she coughed so hard she could barely breathe. It hurt. She’d never had a chest cold that hurt so much. Finally, yanking open the door, she heard her pooch barking from the small covered porch. Jordan grabbed the bag that was filled with some basic food provisions, juice, tea, tissues, and a selection of over-the-counter cold remedies. She slammed the car door shut, and on her way back inside she noticed the whitecaps on Jennings Bay. The wind was forcing massive amounts of water into the coves and harbors around town, and she hoped the it didn’t breach the seawall surrounding the property. Jordan’s cottage was closer to Cove Road, but the Rinaldis’ big house was at risk.

Without any further delay, Jordan made it back to the porch, feeling chilled and soaked to the bone despite all the foul weather gear she’d put on. Gertie was barking frantically, having positioned herself under the old wooden swing, and Jordan was starting to lose her patience.

“Gertie, what the hell is the problem?”

That’s when she heard the groan and crack. Jordan looked up just as a large section of an old oak tree, about fifty feet from the house, gave way. Throwing her body against the wall to avoid any debris, Jordan watched as the massive tree split in half and came crashing down, crushing her car in the process.

If she had waited ten more seconds to head outside, Jordan would have been killed.

Frozen in place for—she didn’t know how long—Jordan startled when a large, strong arm wrapped around her.

She looked away from the wreckage in the front yard and into the gorgeous face of Nick Rinaldi.
“Damn. Are you alright?”

Was she? She wasn’t sure. Jordan tried to answer, but she had trouble catching her breath. Sucking in air, he kept her steady when they walked into the house.

Waiting for the dog before he closed the door, Nick sat her on the bench in the entryway. Glancing in the canvas tote from the market, his brow furrowed.

With a low rattling cough that had him pressing the back of his hand to her forehead, she muttered, “Chest cold.”

Shaking his head, he helped her off with her boots and jacket. “Let’s get you settled in bed, and I’ll go get my bag. You’ve got a lot more than a chest cold.”

“My car…”
“We can’t do anything about your car until the storm passes, so put it out of your head. It’s the last thing you need to worry about.”

“One thing at a time.” Nick, a former Navy doctor, was single minded. And as much as Jordan didn’t want to admit it, he was right. In this weather, there was nothing she could do.

“I’ll be fine,” she said, stopping in her tracks. Those few words taxed her already strained system. She coughed painfully into her arm while Nick guided her into her room. The coughing spell was so violent, ripping at her tender lungs, she couldn’t even object as he tucked her into bed.

Sick as she was, Jordan wasn’t blind. Nick Rinaldi had been on her radar since he landed back in Compass Cove the previous fall. The guy was gorgeous, smart, and a gentleman to the core. But he’d settled back in with his grandparents almost six months ago, and other than a token hello, or a polite smile, he rarely spoke to her.

Still, with his lean frame, dark hair, and kind eyes, he checked a lot of boxes.

She thought she heard him mutter something about being stubborn, but her lack of breath didn’t allow a response. If anyone was stubborn, he was. The man of mystery was a well-known do-gooder, and obviously she was his next project. There was only one problem with that. She didn’t want his help. Needing people was a slippery slope, and Jordan had no intention of heading down that way again.

Other books in the Compass Cove series: 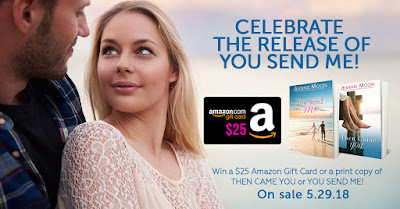 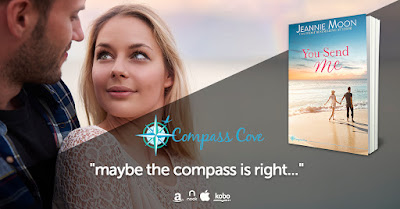 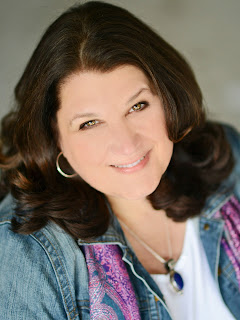 Jeannie Moon, author of fifteen novels, has always been a romantic. When she’s not spinning tales of her own, Jeannie works as a school librarian, thankful she has a job that allows her to immerse herself in books and call it work. Married to her high school sweetheart, Jeannie has three kids, three lovable dogs and a mischievous cat and lives in her hometown on Long Island, NY. If she’s more than ten miles away from salt water for any longer than a week, she gets twitchy.