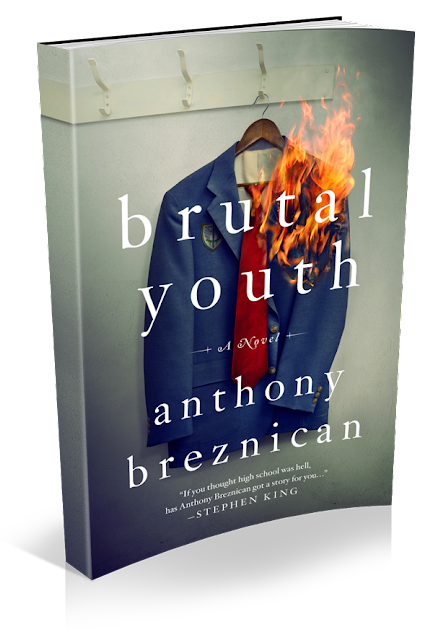 
Three freshmen must join forces to survive at a troubled, working-class Catholic high school with a student body full of bullies and zealots, and a faculty that's even worse in Anthony Breznican's Brutal Youth.

With a plunging reputation and enrollment rate, Saint Michael’s has become a crumbling dumping ground for expelled delinquents and a haven for the stridently religious when incoming freshman Peter Davidek signs up. On his first day, tensions are clearly on the rise as a picked-upon upperclassmen finally snaps, unleashing a violent attack on both the students who tormented him for so long, and the corrupt, petty faculty that let it happen. But within this desperate place, Peter befriends fellow freshmen Noah Stein, a volatile classmate whose face bears the scars of a hard-fighting past, and the beautiful but lonely Lorelei Paskal —so eager to become popular, she makes only enemies.

To even stand a chance at surviving their freshmen year, the trio must join forces as they navigate a bullying culture dominated by administrators like the once popular Ms. Bromine, their embittered guidance counselor, and Father Mercedes, the parish priest who plans to scapegoat the students as he makes off with church finances. A coming-of-age tale reversed, Brutal Youth follows these students as they discover that instead of growing older and wiser, going bad may be the only way to survive.

“If you thought high school was hell, has Anthony Breznican got a story for you…Every bully who stalked you, every sadistic teacher who ever terrified you, every stupid prank, every hopeless crush and false friend: they’re all here, along with a few kids who hang together and try to do the right thing in a brutal environment? By turns funny and terrifying, Brutal Youth is an unputdownable tour-de-force, a Rebel Without a Cause for the 21st century.”— Stephen King

I went into this book with a lot of trepidation, not because I thought it was going to be a badly written book, I knew it would be well written.  No I went into it with trepidation because I don't particularly like books that make me cry buckets of tears.  I don't like reading about people being abused (in what ever form that abuse comes), especially people who feel they have no way to fight back.  I am a stalwart HEA kinda gal and I knew that there was no way this book could be an HEA and that had me anxious. I was also quite concerned about the religious tone of the book.  Being a Catholic I feared this would turn into a bit of Catholic bashing.  I was actually a no go for this one, but my friend Amy over at LadyReader kept telling me I had to read this book, that I needed to read this book and then it showed up in the mail and I gave in.

You can well imagine the day I picked it up to start reading.  The brush of my hand across the cover, the audible nervous swallow as I pulled back the cover and felt the paper as it slid across my fingers when I began to turn the pages,  the acceleration of my heart as I read the dedication,


To Jillo
for my wildflower,
these cruel shadows

the deep breath when I realized that these children would have been in high school when I was.  The book is set in what would have been my Junior year, making this book an even more profound read for me.  And finally the knowledge that I would not come away from this book unscathed as I read the first sentence.

The kid had taken a lot of punishment over the years, so he had much to give back.

The year: 1991.
The setting: A once prestigious now run down, under budgeted, private catholic school in the suburbs of Pennsylvania.
The cast: A Principle who is lost, teachers who are uncaring, unprofessional, abusive, a 'superintendent (of sorts in Father Mercede's) whose greed out weighs his honor, parents who are so caught up in their own world and unhappiness that they can not be bothered with their children, and children who have seen too much, who have hurt too much, and who have been given a pass to create their 'Lord of the Flies' scenario at their school.

"Everybody's pissed off and wants to fucking hit somebody, but this whole system has only one rule: You can't hurt anyone who can hurt you back. So Sister Maria can't clock Father Mercedes, the teachers can't tell Sister Maria to fuck off, and the students can't punch out the teachers. They have to take it out on someone else. That's you and me. We're at the bottom of the pyramid."
- Hannah

"Everybody is somebody's bully."

This book will break your heart, there is no way around that.  This isn't an HEA, this isn't a feel good book.  This is a look into a subject that until very recently, with the advent of social media, has been swept under the proverbial rug.  It is a subject that until recently was encouraged as being 'team building', strengthening, a part of growing up.  I remember distinctly walking into my Freshman year in high school and participating in what was known as FISH Week, something that in this day and age would be utterly frowned upon.  This book can be as the title says brutal.  It is a harsh look into the reality of bullying.  It is heartbreaking and thought provoking, it is a book that will stick in your memory for years to come.

I know you are wondering if I am ready to shake Amy for bringing this book into my world, haha.  No.  This is one of those books that deserves to be read, should be read by everyone.  Is it ultimately my preferred type of read, not at all, but the thing about this book is that what ever your reading preference is, it is irrelevant because this book is more a dissertation on society than a simple fiction story.  Yes, this is a fiction read, but in the end there is nothing fiction about what goes on inside these pages.  They may not happen to the extreme that we see in this book, this is the world of bullying brought down into a microcosm where everything happens.  Every type of bullying, every type of emotion is pulled into this small private school and is boiling over.  It allows us to see how each character reacts, giving us a look at how bullying (in all it's various forms) affects different people.  The ones who want to fight back (Stein), the ones who want to hide (Davidek), and the ones who try to overcome (Lorelie).  Anthony's characters are so well developed that you feel every ounce of their pain.  You could literally pick up the book, flip to any page (having no idea what is going on) and find yourself lost in their world, in their mind.  The characters simply come to life in your hands.

I loved that despite my love for HEA's this book didn't cater to me.  I appreciate that we have to walk away from this book knowing that while some acts are forgivable/excusable some are not.  People need to be held accountable, not everyone can walk away and find forgiveness and redemption.  The one thing that I didn't like is was the way the teachers were written.  Not because I don't believe they can be bullies as much as children (because I well know that they can, I had one like that), but because they were almost cartoonish in their behaviors.  While the school like I mentioned earlier is a microcosm and everything is heightened, the teachers, in particular Ms. Bromine, were so over the top that they made me not only angry but frustrated because they didn't feel right with the energy of the book.

In the end, I think this book is a must read for contemporary literature fans.  I think it would be a fantastic book for AP English classes in high school and literature classes in college to breakdown and discuss.  I think this is a great read for teens and parents to read together and talk about.  It is a book that gives an opening to both parents and teens to discuss their dealings with bullying.  I know for parents (who are my age) we dealt with hazing/bullying and for many we don't look at it the same way people do now. When we were in our middle/high school years like I mentioned earlier the behavior in this book was deemed acceptable and I would tend to say for many it was never anything more than a few laughable moments, but the truth is for others it was harsh and brutal and it changed lives.  We need to be open in this discussion because bullying is more prevalent than ever and it is in my opinion so much harsher than ever.  One thing this book does is take the social idea of bullying now and put it back in an earlier time.  You are seeing what today's type of bullying (was for some) would have been if put back in the 90's before the advent of social media.  This book shows the harsh reality that children live with everyday now, only instead of being pushed under a rug or condone by the adults around them, most adults never even know its happening because social media has brought a secret-ness to it.  It is no longer out in the open, it is behind closed doors and glowing in the light of a computer screen.

So read this book, think about what it is saying to you, to us.  Talk to your children, talk to other adults...let this be an opening to a broader conversation.  Check the internet for Anti-Bullying projects near you...I will leave you with these two sites as a place to start: 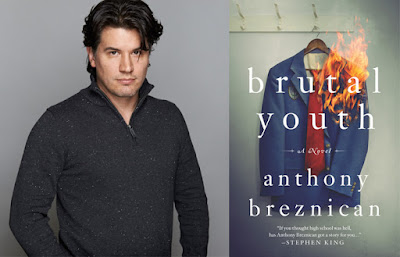 Anthony Breznican was born and raised in Western Pennsylvania and graduated from the University of Pittsburgh in 1998. He has worked as a reporter for The Arizona Republic, Associated Press, and USA Today. Anthony is currently a senior staff writer for Entertainment Weekly, covering Star Wars, Marvel, the Oscars, and whatnot. Brutal Youth is his first novel.

“Surprise, surprise—the good guys don’t always win. Sometimes, they’re lucky if they just get to keep on being the good guys.”