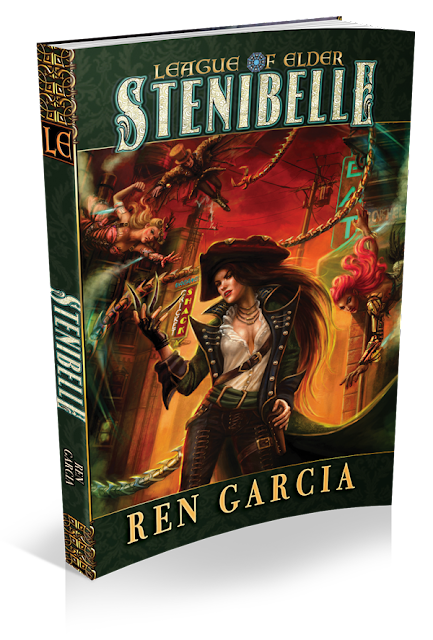 THE 3rd TURN OF THE SHADOW TECH GODDESS
The quest of Paymaster Stenstrom spans the planes, taking a bizarre turn in the 3rd universe, as there he is not an affluent man but a woman in desperate circumstances. Lady Stenibelle is imprisoned for her role in the Seeker Affair, is penniless, and her House of Belmont-South Tyrol is on the verge of extinction. Her spirit broken, Stenibelle is resigned to perform her sentence without fuss, do as she is told, and fade away in obscurity.     However, fate is not yet finished with her. Stenibelle is in the gaze of hidden benefactors with ulterior motives. People claiming to be her dear friends come forward, yet she does not know them. The Quests of the Shadow tech Goddess proceed, and she must discover the hero that lies within or face total oblivion. The disgraced 30th daughter of the House of Belmont will either be the final stake driven into its dying heart, or the ray of light that comes to save it and all else that follows.

I am going to admit I do not quite know where to go with this book.  It turned out to be both infinitely more complex than I expected and also startlingly simple in it's storyline.  I suppose however that is how a good Sci-Fi book should go.  The theories, the concepts, the technology can be difficult to wrap your mind around if this isn't a subject that you have delved into much, but the story is perfect in its ease and simplicity.

This is the story of Stenibelle (Bel).  A woman who has been shamed, disgraced, imprisoned, and broken.  She has lost all hope and all drive, just wishing to pass her time in jail as quietly as possible, to slip away into history.  She is the 30th daughter, a daughter of little consequence, a daughter who attempted and failed to aid her family which is teetering on the edge of demise.
7 months after her imprisonment she is suddenly plucked from obscurity and sent on an adventure that will cross the stars and challenge her way of belief as what she discovers about her self and others crosses universes.

I really did enjoy this story, but I have to admit to finding my self lost multiple times, now that just be an issue for me as I can hardly seem to grasp the concept of Dr. Who and the idea of timelines crossing etc in this book make me think of that.  If I let go of all the things my mind simply can't seem to wrap itself around I found that I thoroughly enjoyed this story.  I liked the cast of characters, the way that his broken woman rises to her full potential through the book.  That she fights back her inner demons and realizes her strength, worth, and grace.  It isn't an easy road she travels to get there, but I loved that she does get there. I enjoyed the secondary characters of Gwen, A-Ram, Alesta, Morgan, and Hannah-Ben Shurlamp, but I wanted more of them.  I realize that they are secondary characters to Bel but they play such major roles I felt like we missed so much of what they were doing on the sidelines.  This is where it gets a bit tricky for me as a reviewer because I can not decide if this is a standalone or not.  When I look it up on Goodreads it comes up as a League of Elder book, which is the title of a series by author Ren Garcia, however this one isn't numbered as being part of the series.  So, the question is would I be getting everything I was looking for in this book in other books....possibly 8 books that may have come before this one?  This can be read as a standalone, but I am honestly not sure it is meant to be.  It always felt like I was missing little pieces of history that would have tied everything together nicely for me. And, if it isn't a part of the series, are we getting more because I will honestly say I want more.  I want to see all of these lives play out, I want the future reveled because although this is not a cliff hanger ending, it is clear that things are not finished.   I can't say much with out giving away important aspects of the story, but I want the stories of ALL the people, I want to see how they connect and weave together...and I kinda really want Morgan to find her happiness because my heart pretty much broke for her.

I loved the artwork in this book and highly suggest that in buying this book you get the 'hard' copy.  I read it in e-book format and while we still get the pictures I can just imagine how wonderful they are on paper.  I mean just take a peek at the picture of the cover below and then imagine more of that through your book.  The art really helped me to understand who each person is.  When so much is being 'thrown' at your brain such as all the concepts and tech, having pictures of people, who are outside of the 'norm' of expectation, to free up your mind in its attempt to form everything is so nice, ha.  Plus the artwork is really just so cool.  I mean look at Hannah-Ben Shurlump, I would have never come up with that in my own mind!

There is a bit more 'raunchiness' in the book than I expected which is perfectly acceptable and fine with me (I mean really, lets look at some of the books I've read in past reviews, ha) but you should know going into it that there are some pretty 'spicy' scenes and while it is not a theme of the book, it does take front and center a few times. It leans to the whole feel of the book so it is not misplaced or gratuitous, but if you are a younger Sci-Fi reader or are considering it for a younger reader, keep that in mind. I would say no younger than 17, but you know your readers best...definitely (in my opinion) aren't going to want to put this in your 14 year olds hands though.

I would love to see this book play out on a screen.  The world that Ren Garcia builds is complex, brutal, ugly, and yet beautiful all at once.  I imagine it being very much like the world from Disney's Treasure Planet, only grittier.  One thing I also thought as I was reading along is that I think this would be an amazing audio book.  I have actually never listened to an audio book but this one just screamed out to me to be listened too.  The idea of hearing it instead of reading it makes me feel like it would allow me to more easily place myself in this world and become lost to it.

I think this is a great read for any Sci-Fi fans.  I will look into the status of this book within the League of Elder series and let you know...you may want to start with the first book there, but honestly I am not sure if they all connect or not.  This is a fast paced quick read and once you get into it you really will want to just devour it in one sitting.

***Update: A exciting few words from the author that help explain where Stenibelle fits, I will be heading over to get my copies of the other books now, yea!***

"Stenibelle is actually Book 9 in the League of Elder series. It's part of the "Turns of the Shadow tech Goddess books, which start in Book 8 (The Shadow tech Goddess)--more books for that group are in-progress.
Paymaster Stenstrom/Stenibelle, A-Ram, Lady Alesta, Morgan-Jeterix and the others are all introduced in Books 6 and 7 (Sands of the Solar Empire/Against the Druries) Books 1-5 deal with a different group of characters in the same universe." -Ren Garcia 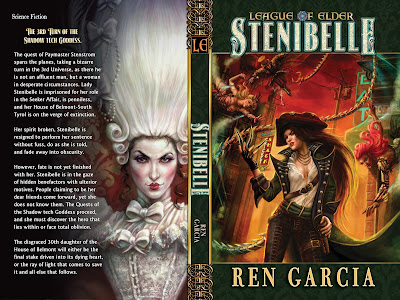 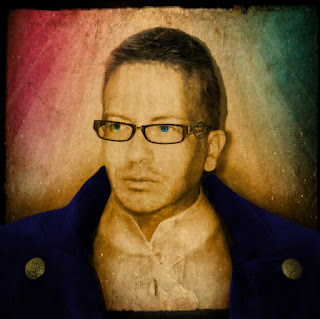 Ren Garcia is a Science Fiction/Fantasy author and Texas native who grew up in western Ohio. He has been writing since before he could write, often scribbling alien lingo on any available wall or floor with assorted crayons. He attended The Ohio State University and majored in English Literature. Ren has been an avid lover of anything surreal since childhood; he also has a passion for caving, urban archaeology and architecture. His books are published by Loconeal. He currently lives in Columbus, Ohio with his wife, and their three dogs.