Book two, Charmed will be released 1 March, 2016
and is being published by Sourcebooks Jabberwoky

Charmed is the exciting sequel to the wildly popular Flunked -- second in the brand new Fairy Tale Reform School series where the teachers are (former) villains.
It takes a (mostly) reformed thief to catch a spy. Which is why Gilly Cobbler, Enchantasia’s most notorious pickpocket, volunteers to stay locked up at Fairy Tale Reform School…indefinitely. Gilly and her friends may have defeated the Evil Queen and become reluctant heroes, but the battle for Enchantasia has just begun.

Alva, aka The Wicked One who cursed Sleeping Beauty, has declared war on the Princesses, and she wants the students of Fairy Tale Reform School to join her.  As her criminal classmates give in to temptation, Gilly goes undercover as a Royal Lady in Waiting (don’t laugh) to unmask a spy…before the mole can hand Alva the keys to the kingdom.

Her parents think Gilly the Hero is completely reformed, but sometimes you have to get your hands dirty. Sometimes it’s good to be bad…

Miri’s voice crackles through the magic mirrors in Fairy Tale Reform School. “Let the first annual Wand What You Want hour begin!”
Wands begin popping up in kids’ hands as we walk through the halls, and we all cheer. Pop! My wand arrives in my hand—long, dark-gray, and nicked like it’s seen a few battles. Hmm…what to try first… I’m just about to test the wand out, when I feel the hair on the back of my neck stand up. Instinct tells me to dive out of the way. When I look up, I see a classmate spelling the troll next to her. The girl turns into an ice sculpture. Geez, that was close. I better stay alert.
Pop! Pop! Pop! Kids begin casting all around me. The crowded hallway is suddenly full of talking woodland creatures, toads, fireworks, and a pretty impressive cloud raining licorice. Kids are cheering and fighting, and the sound of all those wands working is enough to give me a headache. I hurry away from the spell zapping, looking for somewhere to practice alone.
Slurp!
The chaotic hallway disappears behind me, and a new empty hall arrives in its place. I happen to know this hall leads to the school courtyard so I hurry down it and head outside. Ahhh…this is more like it. The warm sun is shining bright high above the castle walls, making me wistful for adventure. I can never sit still for long.
“Pardon the interruption! We hope you are enjoying your wand experience, but remember, all wands disappear at the hour mark so choose your magic wisely,” Miri says. I’m relieved to find no mirror in the courtyard, which means she can’t see what I’m up to. That magic mirror is forever tattling on students for bad behavior. “As a reminder, flying is not advised.”
“Not advised, but she didn’t say it was against the rules,” I say to myself. I flick the wand over my stuffy, uncomfortable pale-blue uniform and turn it into a comfy peasant shirt and pants. I swap out my ugly school shoes for my beloved lace-up boots. Now that I’m comfortable, I get to the task at hand. I’m sure an actual spell would work better, but since I don’t know one, I just imagine myself flying, and Bam! I’m slowly floating up, up, up in the air. Score!
A Pegasus flies by me pulling a coach with four students in it.
“Hi, Gilly!” they shout and wave.
When you save your school from a wicked fairy, people tend to remember your name. Even if you don’t remember theirs.
“Hi!” I say, lying back like I’m floating on a cloud. Wow, this is relaxing. I stretch my arms wide and—oops!
My wand falls from my grasp. Uh-oh. I begin to plummet, spinning faster and faster with no sign of stopping. Before I can even think of a way to break my fall, whoosh! I feel my body hit a blanket and bounce up, then land again on a magic carpet.
“Ten minutes into Wand What You Want, and you’re already having a near-death experience?” my friend Jax asks. His curly blond hair looks white in the bright sunlight. 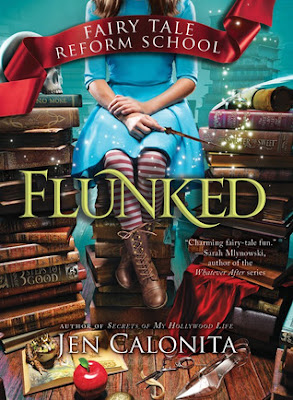 Would you send a villain to do a hero's job? An exciting new twisted fairy tale series from award-winning author Jen Calonita.

Full of regret, Cinderella's wicked stepmother, Flora, has founded the Fairy Tale Reform School with the mission of turning the wicked and criminally mischievous into upstanding members of Enchantasia.

Impish, sassy 12-year-old Gilly has a history of petty theft and she's not too sorry about it. When she lifts a hair clip, she gets tossed in reform school-for at least three months. But when she meets fellow students Jax and Kayla, she learns there's more to this school than its sweet mission. There's a battle brewing and she starts to wonder: can a villain really change? 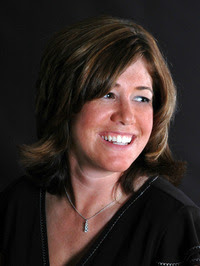 Jen Calonita has published more than a dozen novels, has seen her works translated into nine languages, and is the recipient of the Louisiana Young Readers Award. When Jen isn't plotting, she lives in New York with her husband, two sons, and their feisty Chihuahua, Captain Jack Sparrow.
Website ~ Twitter ~ Facebook ~
Fairy Tale Reform School Facebook ~ Instagram

a Rafflecopter giveaway
Posted by Malissa at 11:10