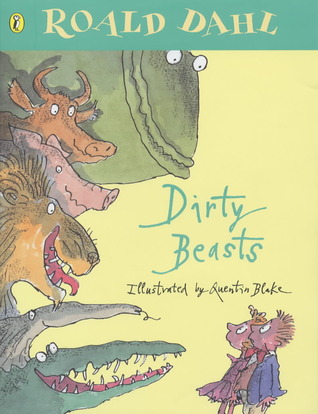 Roald Dahl's inimitable style and humor shine in this collection of poems about mischievous and mysterious animals. From Stingaling the scorpion to Crocky-Wock the crocodile, Dahl's animals are nothing short of ridiculous. A clever pig with an unmentionable plan to save his own bacon and an anteater with an unusually large appetite are among the characters created by Dahl in these timeless rhymes. This new, larger edition is perfect for reading aloud and makes Quentin Blake's celebrated illustrations even more enjoyable.

What a fun book to have a chance to review, but at the same time quite difficult to do.  My favorite thing about this book is the old world feel to it.  It reminds me greatly of a Grimm's fairytale or an Aesop's Fable: a bit harsh, a bit shocking, quite a bit scary, an important lesson to learn, but with Dirty Beasts we also get more than a bit funny!

I will say that as a parent or teacher you may want to read Dirty Beasts on your own first before sharing it with your child(ren) or classroom.  Dirty Beasts is fun and witty, but it is also a tad harsh and could be scary for little ones.  You've got a pig realizing his fate and let's just say he doesn't take it lying down. There's an anteater who after being severely neglected by a greedy and selfish child finally gets to eat and well, there's some confusion over the words ant and aunt.  In each of these tales is a little bit of a lesson to be learned...once you get over your gasps and giggles.  The pig will make you think about what you eat, where your food comes from...if you're on the fence about vegetarianism it may push you over. The anteater, reminds you of several points, 1. Grammar is important, 2. Animal neglect is animal cruelty. When you get a pet you have a responsibility to care for it. and 3. Greed and selfishness are unbecoming and undesirable traits.

There are 9 animals in all

The Pig
The Crocodile
The Lion
The Scorpion
The Ant-Eater
The Porcupine
The Cow
The Toad and The Snail
The Tummy Beast (I am still not entirely sure what that one was, haha)

and each poem is between 2-4 pages.  I can say that I loved each one, I started reading them on my own and then began laughing so hard I had to 'hunt' down the husband and read them to him. Once he was giggling my girls came running to see what was going on and stayed and listened while I read the entire book.  There were a few shocked face moments and quite a lot of laughter, but the best part was when I was done they grabbed the book from hands and raced upstairs to their room where I could hear them laughing as they went back through all the poems again.  I am definitely going to add it into our school curriculum this year and go through each poem to make sure they learn the lesson in each one.  Luckily for all of us they poems and pictures are so fun that reading them again will be no hardship.

The book will also give you a chance to talk about how our society has changed since the poems were first written.  There are a few moments here and there that as adults we might cringe (for example in the Flying Cow poem some one is called a filthy foreigner) but we must remember that this book was not originally published in 2002, Mr. Dahl published Dirty Beasts in 1983, times have changed.  So keep a light heart and if you find there is something that causes you concern in the way the book portrays someone use it as a learning moment for yourself or your children....Dirty Beasts is full of learning moments for everyone all while having fun.

Overall Dirty Beasts is a truly fun little book.  You can sit and read the entire thing in around 15 minutes or like I mentioned I will be doing, you can take each poem and break it down into a lesson.  Remember that some of the poems can be a bit scary so I would use caution when reading to your youngest readers, you don't want to give them nightmares, in fact I would steer clear of this as night time reading in general; at least if you do be prepared to read something more soothing before lights out.  It really is a genuinely delightful read, the verse is smooth and light even when the topic may not be, the pictures are fun, I like how the illustrator stuck to more of a water color palate allowing the words to be the brightest colors in your mind as you read.  Dirty Beasts is a great place to start on what will become a journey of love through Roald Dahl's stories and is a wonderful addition to any school or home library!

Giveaway:
(1 winner can pick 5 books from the Roald Dahl collection! US Only.)
a Rafflecopter giveaway 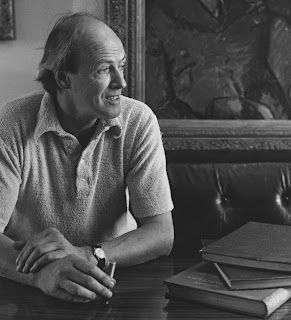 
Roald Dahl (1916–1990) was one of the world’s most imaginative, successful and beloved storytellers. He was born in Wales of Norwegian parents and spent much of his childhood in England. After establishing himself as a writer for adults with short story collections such as Kiss Kiss and Tales of the Unexpected, Roald Dahl began writing children's stories in 1960 while living with his family in both the U.S. and in England. His first stories were written as entertainment for his own children, to whom many of his books are dedicated.

Roald Dahl’s first children’s story, The Gremlins, was a story about little creatures that were responsible for the various mechanical failures on airplanes. The Gremlins came to the attention of both First Lady Eleanor Roosevelt, who loved to read the story to her grandchildren, and Walt Disney, with whom Roald Dahl had discussions about the production of a movie.

Roald Dahl was inspired by American culture and by many of the most quintessential American landmarks to write some of his most memorable passages, such as the thrilling final scenes in James and the Giant Peach - when the peach lands on the Empire State Building! Upon the publication of James and the Giant Peach, Roald Dahl began work on the story that would later be published as Charlie and the Chocolate Factory and today, Roald Dahl’s stories are available in 58 languages and, by a conservative estimate, have sold more than 200 million copies.

Roald Dahl also enjoyed great success for the screenplays he wrote for both the James Bond film You Only Live Twice in 1967 and for Chitty Chitty Bang Bang, released one year later, which went on to become a beloved family film. Roald Dahl’s popularity continues to increase as his fantastic novels, including James and the Giant Peach, Fantastic Mr. Fox, Matilda, The BFG, and Charlie and the Chocolate Factory, delight an ever-growing legion of fans.

The second charity, The Roald Dahl Museum and Story Centre – a unique cultural, literary and education hub – opened in June 2005 in Great Missenden where Roald Dahl lived and wrote many of his best-loved works. 10% of income from Roald Dahl books and adaptations are donated to the two Roald Dahl charities.

On September 13, 2006, the first national Roald Dahl Day was celebrated, on what would have been the author’s 90th birthday. The event proved such a success that Roald Dahl Day is now marked annually all over the world. September 13, 2016 is Roald Dahl 100, marking 100 years since the birth of the world’s number one storyteller. There will be celebrations for Roald Dahl 100 throughout 2016, delivering a year packed with gloriumptious treats and surprises for everyone.