LOVE RESTORED by Carrie Ann Ryan is out now and trust us - you want to meet Graham Gallagher. If you love a man who is good with his hands, make sure to grab LOVE RESTORED today!

In the first of a Montgomery Ink spin-off series from NYT Bestselling Author Carrie Ann Ryan, a broken man uncovers the truth of what it means to take a second chance with the most unexpected woman…
Graham Gallagher has seen it all. And when tragedy struck, lost it all. He’s been the backbone of his brothers, the one they all rely on in their lives and business. And when it comes to falling in love and creating a life, he knows what it’s like to have it all and watch it crumble. He’s done with looking for another person to warm his bed, but apparently he didn’t learn his lesson because the new piercer at Montgomery Ink tempts him like no other.
Blake Brennen may have been born a trust fund baby, but she’s created a whole new life for herself in the world of ink, piercings, and freedom. Only the ties she’d thought she’d cut long ago aren’t as severed as she’d believed. When she finds Graham constantly in her path, she knows from first glance that he’s the wrong kind of guy for her. Except that Blake excels at making the wrong choice and Graham might be the ultimate temptation for the bad girl she’d thought long buried. 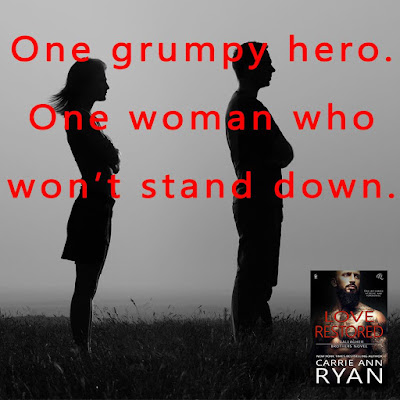 I am so happy that Carrie Ann Ryan decided to tell the story of the Gallagher brothers.  I have loved seeing them periodically in the Montgomery Ink books and have especially wanted to know Graham story.  I can safely say that the Montgomery Ink clan might want to keep an eye out for these Gallagher Brothers, they may find themselves eclipsed.

I loved Graham and Blake together.  They're both such strong personalities that they are like magnets bouncing off of each other but you know with just one turn they will connect in such away pulling them apart will be a near impossibility.  Graham is the perfect Pouty Man Bear, as the wonderful Tessa Bailey has dubbed men such as Graham Gallagher, he's dark and moody, he's bearded and buff, but he has a heart full of love that just needs the right woman to open it up and let all the love out.  Thankfully Blake comes into his life.  She is the exact opposite (he thinks at first glance) of what he wants in a woman but their pull toward each other can't be denied and even when everything is falling apart around them and their pasts threaten to tear them apart that pull never goes away and eventually shows them that the past can be overcome even if it can't ever be forgotten and love can make hearts whole again and turn fear into joy.

There are as with many of Carrie's stories loads of twists and turns that you won't see coming and that will have you glued to your seat waiting for the next 'shoe to drop' and to discover how everything turns out.  I love that we get to see the Montgomery Clan show up.  They aren't major players (except in the fact that Blake works at Montgomery Ink) but just getting a glimpse at them gives you that needed Montgomery rush.  You'll get to know the Gallagher brothers a little more and watch the love and frustration that comes with the brothers interactions.  The family relationship that was a strong point in Montgomery Ink is here with the Gallagher Brothers and I am glad for it.  These guys have the kind of sibling relationships we all wish we had, especially if you are like me and your siblings are scattered across the U.S. and not able to just pop in and annoy you whenever.  :-)

Carrie Ann Ryan is bringing us another great romance series with the Gallagher Brothers.  It's got a similar 'look' of Montgomery Ink, with a bit of a darker/broodier feel (at least with Graham and Blake's book) and I can't wait for more.  Any fans of Carrie Ann Ryan are going to want to have this in their hands and Contemporary Romance fans this is a one click series.  You are going to love this broody (with reason) fellow and the strong woman that rocks his world off its axis. One of the main things I adore about Carrie's books is the strength and conviction of her female characters and that trend continues in this story. 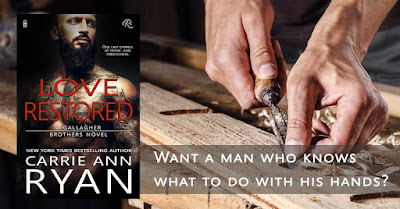 Get a sneak peek at LOVE RESTORED:

When the game started, and the Avs took the ice, Graham kept his attention on the players rather than the very sexy woman beside him. His team needed his head to be in the game and not on Blake’s curves. And, yes, he might be a little superstitious, but whatever. At the face off, Toronto took possession of the puck, and Blake let out a little cheer— not loud enough for others to hear, but just those on either side of her. Holy hell, had Austin sent a traitor into their midst? A freaking Toronto fan at a home game for the Avalanche? What the hell was that Montgomery thinking? He growled at her as she quietly cheered the first Maple Leaf goal and met Derek’s eyes. Why the hell was the other man laughing? Couldn’t he see that Blake was cheering for the wrong team? She lived in freaking Denver for God’s sake, and considering that her family’s ancestral home was here, she had to be a native. And yet, she cheered for Toronto? It was as if she were trying to annoy him. After the first period, he got up, his hands fisting at his sides. “I need another beer.” Owen, who had been quiet the entire time since he was apparently answering emails on his phone, looked up. “Grab me a soda, will you? I need some caffeine, and since I’m driving us home, I’ll let you drink.” He winked toward Blake. “I think you’re going to need alcohol tonight.” Graham grunted and stomped his way through the aisle and up the stairs so he could get a beer. Since everyone and their mother got up during intermission, he’d have to wait in line, but maybe that would help him cool off. He was just so freaking pissed that she would dare root for another team. And that made no sense. Why could she get under his skin so easily? “Hey, Graham, wait up,” Derek said as he jogged up behind him. “I don’t know what you did to piss Blake off, but I should probably let you know she’d rooting for Toronto just to needle you.” Graham turned. “Excuse me?” He must have looked like he wanted to rip someone’s arm off because a few people moved back in the line and Derek held up his hands. “She’s a diehard Avs fan. Even owns a signed Sakic jersey and keeps a spare she can wear during games. The signed one only comes out during the playoffs. It’s got to be killing her to root for the other team, and it must be because of you.” That little witch. “How do you know it’s not because of you?” he asked, intrigued and pissed off all at the same time that she would do something like that. “Because we’re friends, not close ones, but friends. This isn’t a date or anything, just to let you know. I think she’s single, but since my girlfriend up in Seattle would skin me if I even dared to look at Blake that way, I’m just fine as I am. Anyway, I thought you should know that she’s just trying to piss you off. Bro code and all that.” Graham clenched his teeth. “Bro code.” He ordered his beer, Owen’s soda, and paid for Derek and Blake’s drinks since Derek had been so helpful. “What are you going to do about Blake?” Derek asked as they made their way back to the entrance and showed their tickets. “Don’t know yet.” And that was the problem. He never knew about anything where it came to this woman. She could intrigue him, turn him on, and piss him off all in the span of ten minutes. That had to be a record. He handed Owen his drink and sat back down, studying Blake as he did so. “What?” she asked, brows raised. “Nothing,” he said softly. “Not yet anyway.” She blinked and opened her mouth to say something, then froze as people started to chant, “Kiss! Kiss! Kiss!” around them. Graham slowly looked up at the huge screen on top of the ice and cursed. “You’ve got to be fucking kidding me.” Blake laughed. “No way. No fucking way.” “Kiss! Kiss! Kiss!” He was pretty sure Owen was yelling the loudest, and Graham was going to have to kick his brother’s ass when this was over. “Fuck it,” Graham growled and gripped the back of Blake’s head and crushed his mouth to hers. They both froze a moment as cheers erupted around them before he sank deeper into the kiss. He didn’t open his mouth, wouldn’t let his tongue touch hers, but the moment of lips against lips left him breathless. He pulled back, his eyes wide, Blake’s even wider. “What the hell was that?” Blake gasped, her cheeks slashed with red. “I…” He cleared his throat. “Just watch the game. And you can cheer for your precious Avs. Don’t hurt yourself going for Toronto.” He turned away from her and gulped half his beer down in one go. He could feel Blake’s eyes on him before she turned away, and see her hands shaking out of the corner of his eye. “Dude,” Owen whispered. “This is going to be fun.” “Fuck you,” Graham growled and drank the last of his beer. He didn’t know what had come over him, but that had to be the last of it. There was no way he was going to go there. If he were this unraveled and tense at the same time with just one kiss, with just one look, he wouldn’t make it if he had her in his arms. In his bed. Blake wasn’t for him, and damn it, he didn’t want her to be. The Kiss Cam could go straight to hell. 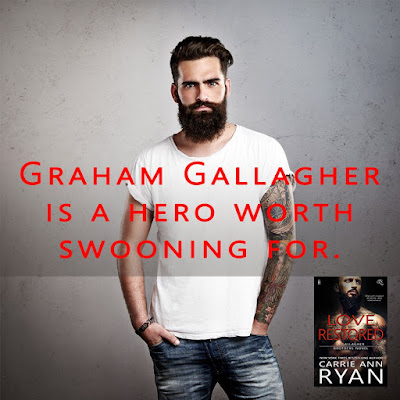 Carrie Ann Ryan is giving away a Kindle Fire! Enter to win via the Rafflecopter below. a Rafflecopter giveaway 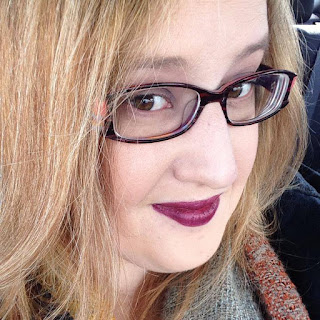