Lost For You by Jayne Frost - Release Day Review, Excerpt, and Giveaway

Be sure to enter the giveaway for a $25 Amazon gift card at the end of this post!

I've been clean for years. But now my addiction has a face. Her face... At eighteen, I stood at the precipice of stardom. I had the record deal. And the tour to back it up. But I succumbed to the pressure of that life. The dark side. Now, I skate on the fringe. My brother is the genius guitarist for the band Caged, and I’m the one who helped make that happen. I’m happy to run my bars and my land development company. Sure I am. And then I meet her—Taryn Ayers—the music manager behind the three biggest bands in the country. She doesn’t know I’m Cam’s older brother. Or that I’ve got a secret that makes her world and mine fundamentally incompatible. Problem is, I want to know Taryn. I crave her as much as any drug. But can I risk letting her know me?

Lost For You is a STAND ALONE New Adult Romance.
Intended for mature audiences due to hot as sin rockstars and the world they live in.
**Please note: This book contains instances of drug use.**

So, Jayne Frost is a new to me author and I have to say that Rockstar romances have never seemed like my thing, I have actually always kind of just avoided them for some reason...but wow, after this series they may be my NEW thing.  When Lost For You landed in my inbox I hesitated because (besides being a Rockstar Romance, ha) a 4th book in a series and you guys know how I hate reading books out of order but I bit the bullet and went for it and I am so glad that I did.  I binged the first three books so I would be ready to review this one and don't regret it one bit.  That being said you honestly do not have to have read any of the previous books, this is truly a stand alone within a series and you will have no head scratching moments if you just dive in right here.  You'll definitely be going bak for the first three...but don't feel like you need to read them in order at all.

Chase is the brother to one of the main characters in this series and he's played a small role in each book so I was a little surprised to see that he was getting a book at all much less before the whole band had gotten theirs, but I am so glad that Jayne Frost went this direction and gave us this book.  It is a powerful and emotional read and worth every bit of anxiety I felt while devouring it.  I loved the strength of these characters even when they are falling apart.  Chase is a self made man, he has built an empire from nothing all the while battling addiction, regrets, fear, and a tinge of jealousy.  I was amazed by him every moment, even when every thing go to be too much and he broke.  His heart was always there on his sleeve, he just needed someone to see it and hold it for him.

Taryn, her strength amazed me just as much as Chase's, even during the times when I wanted to shake her or trying to hold the world together, when I just couldn't understand why she kept holding on, but we would need have had the story, her story if she had let go.  While Chase laid his heart bare to the world Taryn held hers closed behind an iron gate.  A gate she had to build so she could carry the world in her hands, a world she needed to release hold of so it could grow partially on its own and so she had a hand free to hold the heart Chase was trying to give to her.

There was a maturity to this book that I appreciated.  While the first three books are definelty New Adult in genre I didn't feel that way with this one.  This felt more straight contemporary romace.  These weren't characters trying to find their way, (well not exactly) they trying to learn how they fit in the big wild world.  These are established characters that have made their mark and are settling into the lives they have been building for years.  I loved that maturity, it added to the gravity of a story that was already heavy but I don't think a 'New Adult' character could have believably pulled off the story.

We don't see as much of the previous characters, though they are there...but one character we get quite a bit of is Logan and I have to say he's been kinda pissing me off between books 3 and 4.  I know that it is only building to something that will be explosive when his book comes out but man I just want someone to give him a taste of his own jerkish (got to keep it polite for the censors) medicine.  He has been really rough the last two books, clearly there is a lot happening in his mind but man I don't know how Jayne is going to bring him back to likable.


Speaking of secondary characters, I really hope that we will get a chance at seeing Beckett, Dylan and  Laurel.  They all played such major roles in this book that it would be a shame to never see them find their happiness and hopefully happily ever afters.


I felt my heart breaking over and over again with the characters as I made my way through but I loved with them just as much as they did as well.  Each one of the books in this series has tugged at my heart in ways that I haven't felt in a long time.  Each one was even more special because some how it felt like a piece of me was in them, from being located in a place I grew up, a character that is similar to someone in my own life, or a hurt that I have felt.  I don't know how she has done it but there is probably a little bit of every readers soul inside these pages and I hope that you will give these books a read, you won't regret one minute spent with these characters, they will be ones that will stick with you through the years.

At the subtle shift in energy, I pulled Taryn to my side. She kept her head down as I spun us toward the main floor. When we emerged on the other side of the bar, I ushered her through the door marked No Admittance and into the hallway that led to my loft. “I shouldn’t have come,” she said, her breath uneven. “Do you have a back entrance?” I rounded on her, and when I caught sight of those eyes, impossibly large as she blinked up at me, I couldn’t help myself. My mouth crashed into hers, my tongue demanding entry as I maneuvered her against the wall. Her lips parted on a gasp. But then her hands were in my hair, and it was all hot breath and soft moans. And fuck, the taste. Like strawberries fresh from the vine. “Fuck, you’re sweet.” My palms glided up her sides, inching towards her breasts. “I knew you’d be sweet.” Her little pants warmed the hollow of my neck. “So are you.” I stroked her jaw with the pad of my thumb, and even in the dim light, I saw the flush color her cheeks. “One more taste.” It wasn’t a question. More like a vow. One more taste and I’d peel her off the wall. One more taste and we’d go get that drink I’d promised. One more taste and I’d be able to control myself. 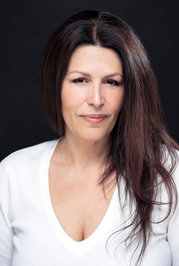 Jayne Frost hails from Texas (by way of California), currently living in Sin City. A romantic by nature, she believes in fairytales and happily ever afters. And music. Because the best stories always have a soundtrack.