Siren in the City by Lexi Blake (SophieOak) - Review and Excerpt 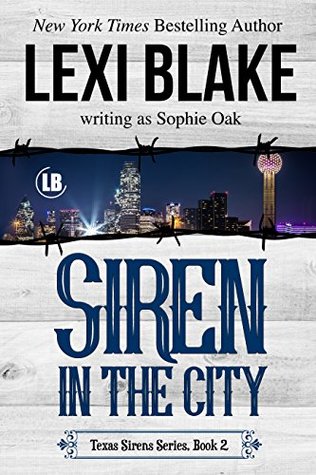 Re-released in a second edition with new scenes.

Jack and Sam married Abby. It was supposed to be for forever, but lately Abby wonders where her alpha male has gone. Jack has retreated and life has become decidedly vanilla. It isn't the true marriage she and Sam wanted. Sam and Abby know the time has come to fight for what they need. A call from his mentor forces Jack to revisit the club where he discovered his sexuality. Jack's half-brother is in the city and interested in a little blackmail. Can Jack handle two defiant subs and a brother in need of some tough love? Sometimes all it takes to find the way home is a little love and a lot of mischief. Come back to the beginning and revisit some of your favorite old characters or find new ones to love. Siren in the City has been revised and new scenes added. And if you look closely, you’ll find not only the beginnings of the Sophie Oak world, but also the seeds of how McKay-Taggart began…

Oh, girl....you are in some serious trouble now.  What has our Abby gotten herself into this time?  In Siren in the City her full brat comes out but for a very good reason.  I really enjoyed getting back to the lives of these three and even more so that this is the story that brings Jack and Sam closer together.  While I hated that for a good portion of the book the trio is separated I loved how every moment is meant to bring these three back to each other, through uncertainties, pain, fear, angst...each moment woven into a tight pattern of love, respect, need, and peace.

I find myself a little at loss in what to say about the book because I don't want to talk too much about what happens because there are so many little pieces that bring this story together that by giving away any of them I feel that I would be spoiling the story for you.  There is very much a bit of a suspense feel to the story that needs to be played out in your mind and your mind only.  What you should know is that this is an easy quick read.  It is full of romance, a bit of intrigue, a lot of brattiness on Abby's side as I mentioned, ha, some angst, strained relationships, heartache, and love.

I will also say that while I loved getting back to the trio's life, I was especially excited about all the secondary characters in this story, some I know and some who are new to me.  I loved meeting the Masters and Mercenaries men in this book, they were so much the same and yet different enough to bring me a huge laugh since I know who they become.  I need the stories of at least three of the new characters now too, Julian and Sally, and Lucas....what will become of them, one needs know and hopefully soon.

If you were a fan of the first book Small Town Siren (see my review by clicking the title) than you definitely want to pick up book two.  Yes, the main characters are the same, but the story build beautifully onto what we read in book one.  It gives us the relationship we knew they wanted and deserved and opens the doors for so many more stories.