I am excited to help announce that STRANGE TANGO is currently on sale for only $.99!
Don’t miss out on this quick and sexy read. Snag up your copy today! 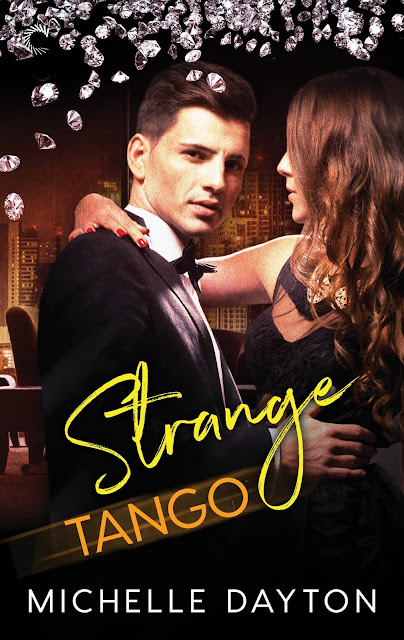 Adam Patrick Henry, professional jewel thief, knows an amateur—and a cheap wig—when he sees one. The mysterious woman across the room is far from a pro, but her good instincts might come in handy on his next job. He could use a partner, and if that partner happens to be irresistible, all the better.

Jessica Hughes has a long way to climb—and a whole lot to prove—before she's back where she belongs. A cruel setup cost Jessica her job and her reputation, and she's not opposed to a disguise and some underhanded tactics if it means getting her life back. But she's no thief, not really, and teaming up with a gorgeous stranger who's clearly up to no good might prove more dangerous than it's worth.

Working a job this big could give Adam and Jessica everything they've ever wanted—if their rocky partnership lasts long. 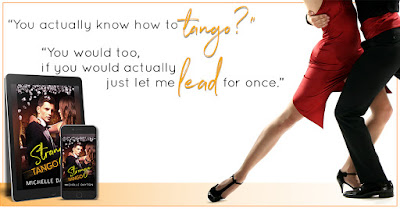 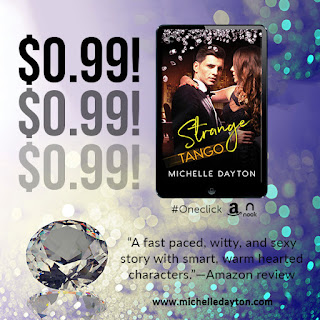 Jessica Hughes couldn’t remember the last time she’d been so physically uncomfortable. The wig from hell was so itchy her eyes were watering with the effort not to scratch her head. The sequins from the stupid dress were poking her in the armpit like tiny little daggers. None of the reviews on Rent the Runway had mentioned that fun detail. The sexy pink pumps that RTR recommended as an accompaniment to the dress looked great, but they also pinched her toes and heels. She was going to have feet full of blisters tomorrow.

And maintaining a British accent was a lot more difficult than she expected.

Luckily, the idiot she was dancing with had quite a bit to drink with dinner and didn’t seem to notice how she kept repeating words like “brilliant” and “fancy” and “fortnight” in their conversation.

Now if only she could distract him enough to get his keycard out of his pocket.

She glanced over his shoulder at the clock on the wall. In five minutes the speeches would begin and he would be up on the stage for a half hour. That was her window. Unfortunately, she was running out of ideas on how to pull the keycard out of his front pocket without getting grabby. Uck.

He picked just that moment to run his sweaty hands down her mostly bare back and pat her on the bottom. She was lucky that her face was over his shoulder so he couldn’t see her suppress a gag. Luckily, she recovered quickly and gave an approving squeak. So gross. I just let Jerome Taft touch my ass.

Oh, how the mighty had fallen. Six months ago she’d been a star. The youngest VP in the history of the University. The boss of Jerome’s entire department. Thank goodness they’d never actually met in person. The University had three campuses across Chicagoland and he’d worked at the suburban campus. While she’d been VP, his reputation had been less than stellar. She remembered that in last year’s performance review, his manager had labeled him “eager for advancement but unwilling to put in the hard work required.” In other words, he liked to complain about his lack of authority while he sat around playing on the Internet all day. Exactly the opposite kind of employee she wanted in her department.

And now she was dressed like a pricey call girl and letting him grope her. She felt like crying. Or slapping him in the face.

Pull it together, Jess. Focus on the goal. He’s a necessary evil for tonight.

She glanced around the dance floor to make sure that no other members of her old department had decided to dance. For those who didn’t know her well, she was confident that her disguise was good. Tonight she didn’t look anything like Ignatius University’s disgraced former Vice President of Technology. The one who’d been led out of the building by security officers last October.

No, tonight she was a skinny, tan, tarty, blonde Brit. But there were a few people in the ballroom who had known her for years. If one of them got a good look at her face…well, that could be trouble.

Luckily, the dance floor was still safe. It was crowded with couples, but no one she recognized. The band finished “As Time Goes By” and transitioned to “At Last.” She sighed. She loved that stupid, sappy song. Trying to distract herself from Jerome’s hands and the ticking clock, she closed her eyes and counted backward from ten.

When she opened her eyes, a tall man with brown hair was staring right at her.

About five feet away, he danced with a brunette in a purple dress. For a moment, his open stare convinced her that she’d been recognized. Her pulse raced, and she started to sweat. But, no. After meeting his eyes for ten seconds, she knew she’d never met him before. Because, good God, she would have remembered this one. Wow. He was about 6’3” with broad shoulders and wavy hair. His eyes were a vivid bright blue.

The brunette said something to him, and he broke eye contact with Jess to look down at her. Jess kept on staring. She’d been looking for a distraction and this potent combo of Tom Hiddleston and Gerard Butler had given her just that. Men dancing in tuxedos didn’t usually look so…masculine.

He looked back up at her and their eyes locked again as the female singer of the band crooned the lyrics to “At Last.” Inwardly, Jess snorted. Probably every woman in the room looked at that guy and heard Etta James singing “At Last.”