Connected By A Kiss by Christina McKnight - Spotlight, Excerpts, and Giveaway

Celebrate the Holiday Season with a collection of Regency Romances. 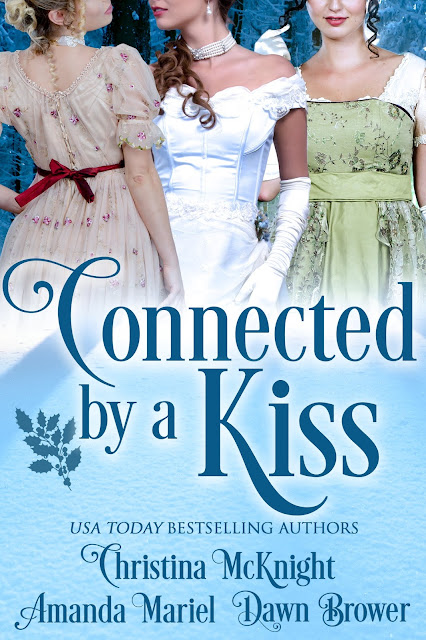 A Kiss At Christmastide by Christina McKnight

After a ruinous London season, Lady Pippa Godfrey has given up on the idea of true love--until a devilishly handsome stranger arrives at her Somerset estate, seeking shelter from a winter storm. Soon, she's daring to claim a Christmas kiss with Lucas Hatfield, the Earl of Maddox, but when the storm abates, will he break her heart like all the rest?


How To Kiss A Rogue by Amanda Mariel

Lady Natalie's betrothal is ended and frees her to pursue the man of her dreams. During a holiday party she discovers the lord she desires in attendance. So hatches a plan to snare him.

An arranged betrothal has Lady Juliette Brooks seeking out her former childhood friend, the Duke of Kissinger to beg him to honor his long ago promise. Grayson Abbot has no desire to marry, but he always keeps his word. As they race to Scotland they rediscover the joy of friendship and a passion neither planned on.

Excerpt from A Kiss At Christmastide:

A moment of confusion clouded her mind as the laughter dimmed and a light breeze assaulted her face—as if someone had opened a window to a gusty wind.

At her side, Pippa’s mother fanned her face. Her wrist whipped to and fro, increasing as the room went silent.

Everything froze around her but her mother’s thrashing fan.

The Duchess of Midcrest, her dear mother, who’d labored for over twenty years to rise above her merchant class upbringing, would once again be embroiled in a scandal—all because of Pippa.

“Do you wish to depart?” her mother whispered.

“I did not believe you had, my child.” Her mother sought to soften the blow—something that society had done to the current Duchess of Midcrest a hundred times over. “However, that does not change the appearance of things, no matter what we say or do in this moment.”

Pippa lifted her chin to keep her tears from streaming down her face.

“I do not understand why,” Pippa said as she leaned in close to her mother to whisper. “Lady Natalie and I are such friends.”

“Friendship and jealously often hold hands so tightly that one cannot distinguish between the pair.”

Excerpt from How To Kiss a Rogue:

Glancing from behind the fern, her stomach dropped. “Bradford,”—She came out into the open—“What are you doing here?”

“Knightly asked me to come in first.”

She released a breath she hadn’t known she had been holding. Christian was here. “You cannot stay.”

“I must. It would be highly improper to leave you unchaperoned with a man we are not related to.” Bradford smirked, shoving his hands in his pockets.

Natalie stepped up to him, placed her hands on his shoulders, and began pushing him toward the door. “Nothing untoward will happen as long as you leave now.”

Oh, why had she failed to think of a chaperone? Now Bradford had his nose squarely in the center of her scheme and he’d surely ruin everything.

A mischievous twinkle lit his eyes and he chuckled. “Nothing untoward will occur at any rate. Knightly has no wish to ruin you.”

Natalie’s face warmed and she gave another shove. “Mind your own affairs.”

“Perhaps I should tell Mother what you are about.”

“You would not dare! You cannot. Imagine what she would do, Bradford.” Natalie dropped her hands from his shoulders and gave him her best pouty look. “What do you think I am about? You act as though I am some sully maid,” She peered at him, her blood heated with angry indignation. How dare he think she was going about, carrying on trysting with men? No matter it was exactly her intended purpose…he should not assume such from her.

“Do calm yourself. Getting your skirts in a knot will change nothing.” Bradford shook his head. “We both know what you are doing here.”

She closed her eyes for a heartbeat. He was correct, she could no more lie to him than she could herself. “I beg of you, do not say a word to anyone.”

“You are quite entertaining.” He chuckled while he walked toward the door. “I will be directly outside should Knightly require my assistance.”

“You may well be the one in need.” Natalie reached for a nearby pot and flung it toward him. The projectile missed him, crashing into the floor. “You are not entertaining in the least.”

“You had better clean that mess up or Mother is certain to discover what you’ve been getting up to without my having to tell her.” His deep chuckle only increased in volume as he disappeared from the greenhouse.

She ought to have known he was teasing her. He no more wished for their parents to know his friend was secretly meeting her than she did. In retrospect, bringing Bradford along was a good plan on Christian’s part. As much as it pained her to admit it, he would ensure no one caught them alone together. Natalie released a sigh, then smoothed her skirts before Christian entered. Her heart pounded—this was her chance.

She stood still with one hip cocked to the left as he stepped into the greenhouse and approached her. “Lord Knightly, I am pleased you came.”

“You should be equally pleased that your brother was the only one to notice your note. Are you trying to get ruined?”

She swallowed at the harshness of his tone. “On the contrary, that is why I told you not to show it to anyone. Though I must confess, I am pleased Bradford came along. He will make an excellent look out.” She did her best to offer a charming smile despite her sudden nerves.

“And why would we need someone to watch out for us?” Christian leveled his penetrating stare on her.

She reached out a trembling hand and trailed the tips of her fingers across his strong jaw. Even through her gloves she felt his warmth seeping into her—imprinting on her soul. “I want a kiss. One more passionate than the one you bestowed on Lady Pippa.”

Excerpt from A Wallflower’s Christmas Kiss:

Grayson sighed. She wasn’t going to be denied anything apparently. It was too late to save her from herself. Very well, he’d deal with her and then send her on her way. He turned and sucked in a breath momentarily stunned. A silhouette of pure beauty greeted him. Her midnight tresses were wound up and bound neatly into an elegant chignon. His fingers itched to unwind it and see it flow over her luscious curves. All of this and he’d still not seen her face. When she finally turned to meet his gaze he lost all ability to breathe. Those sea-green eyes kept him riveted in place. He should stand and greet her but his body refused to function. She was the last person he expected or wanted to enter his home.

“What no words?” She raised an eyebrow. “And I thought you were noted as the witty duke amongst the ton. I must say I’m rather disappointed.”

Grayson drank in the sight of her. He wanted to remember her as she stood before him for the rest of his days. She was glorious, proud, and fearless. “Didn’t your father teach you better than to enter the lion’s den?” He lifted a brow mockingly. “You could very well get eaten alive.”

Her lips tilted at the corner. “I rather like my chances.” She moved further into the room. “After all I tamed a lion before.”

“There’s a difference between a young cub, and a full grown male, Jules,” he explained. “One is more docile and willing to cuddle. The adult wants to be petted—in other ways.” He stood up and gazed directly into her eyes. “A bite can be pleasurable or….” Grayson crossed over to her side and leaned down, whispering in her ear, “painful depending on your preference.”

Juliette took a deep breath but remained where she stood. He’d give her that much. She’d always been a stubborn girl, and apparently she’d not grown out of that trait. If she didn’t take a step back soon he’d be forced to make a choice. Either he pulled her into his arms and kissed her the way he craved or he put distance between them respecting her innocence. It was a hard decision and warred deep inside him, but he did what was best for her. Turned out that some things were ingrained. Protecting her had always been his first instinct.

“If you’re done trying to intimidate me I have something I wish to discuss with you.”


Follow the tour and enter to #win a $10 Amazon Gift Card! 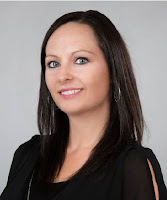 You can visit her online at the following places: