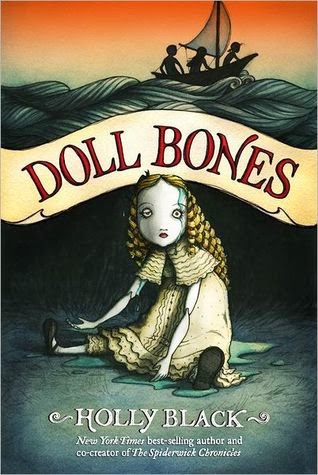 I know you might be wondering why I would be posting this book with a review when it came out almost a year ago (on my birthday I might add), well, the fact is that I have wanted to read if for sometime now and just got the opportunity to do so and I loved it.  Just listen to this:

"He felt his gaze going to Poppy's backpack, knowing the Queen was inside and knowing, without knowing how he knew, that her eyes were open.  He felt the weight of her stare on his back when he turned away.  The hairs on the back of his neck stuck up, tickling his skin and making him shiver."

This book is like an old fashioned camp fire tale, taken down to it's roots and built back up into a wonderful and perfectly creepy novel for tweens and up.  This is a tale of three friends, Zach, Poppy, and Alice, who are leaving the simplicity of childhood, moving in to the years where social groups begin to take precedence, where thoughts of love start to bloom, where realistic dreams of the future, and an awareness of life around them begins.

"Zachary was used to stories without happy endings.  His dad called where they lived West of Nowhere, Pennsylvania, claiming it bordered Better off Forgotten West Virginia, and Already Forgotten Ohio.  When Zach was little, those seemed like magical place names, before he realized they were just sarcasm."


Zach is the main character in this book, and I have to say my only criticism is how well his character is developed in comparison to Alice and Poppy, I would have loved to really get to know them as well as I did Zach.  A climatic moment in Zach's life changes the friendship of these three forever.  Admission are made, feelings are hurt, adventure abounds.  Spurred on by Poppy's talk of being haunted by the ghost of the the china doll, the Queen in their playtime games, the three friends set off on an epic adventure that has me wondering how many tweens will soon be making similar treks on their own.  *Tweens, don't try this at home*

""No," Poppy said, her low low voice very fierce.  "There's people who do things ad people who never do - who say they will someday, but they just don't .  I want to go on a quest.  I've always wanted to go on a quest.  And now that I have one, I'm not backing down from it.  I'm not going home till it's complete.""

This book is so much more than just a ghost story, so much more than the tale of friends on an adventure of a lifetime.  This book should be read in every home with tween, young teens in it.  There are so many great moment's in this book to share with your children, so many opportunities to discuss life, adventure, and the future. I will admit I can not wait to be able to read this again with my 8 year old when the time comes.   Please if you haven't already grab up a copy of this book, let's encourage Ms. Black to write more for this age range.  She did it so wonderfully here, I just want more!