Ari Daniels didn’t count on her whole world tumbling down around her in a mess of shredded promises, broken love, and unbelievable heartbreak. Alone and stricken with grief, she shouldered the blame and eventually closed her heart off, refusing to open it for another.  After all, anytime she tried, guilt and regret were waiting in the wings to remind her how painful it was. A bet and one steamy night with a stranger force Ari to confront all she’s been hiding behind.  She tries to move on, but he refuses to stand down, wanting what she is terrified to give—herself.  This man may very well destroy her in the end, especially when it’s clear he has his own demons. What happens when two broken souls come together, finally allowing themselves to believe in the beauty of love … only to have to fight harder than ever to keep it.

You ever get a book that has been so hyped up, that you are so excited for, that is a wonderful read but just doesn't get there for you?  That was me with Unconcious Hearts.  That's not to say that I didn't throughly enjoy it, I really did, but I think all the hype and my expectations out weighed the reality in the end and I am almost certain I am the only person that feels this way.  I wanted this to be some five start epic romance that I couldn't put away, I couldn't forget about and again, while it was a wonderful story, totally a four star read, it just didn't hit me the way it seems to be hitting everyone else and that's a real bummer.

First let me say I LOVE Harper Sloan's books.  I am honestly never disappointed in what she gives the readers.  With this even, my disappointment doesn't come from the book itself but my expectations of what the book was going to be due to everyone else's feelings about it.  This, this is why I try to stay away from everyone else's reviews, etc, but sometimes its near impossible to, sometimes a book is just everywhere and this is one of those times.

I really enjoyed the story of Ari and Thorn.  I am a particular fan of Thorns, I liked how he is straight up who he is, no questions, no apologies.  He knows what he wants and he doesn't fail to work for it and in this case it's Ari.  I honestly would have liked more Thorn, I would have liked to have gotten deeper into his thoughts and feelings.  We know his past and how he got to be where he is but he felt overshadowed by Ari so much of the time and I feel like we didn't get to know him as well as we could have.  There is so much more depth to him, I just needed more time, ha.

Ari is a great character but I honestly had a lot of trouble connecting with her.  I never felt like she gave us her all.   Yes, I know she is closed off, I know why she is the way she is, but I needed her to be less in her head all the time.  I wish maybe we could have 'sat' in on one of her therapy sessions so we could have delved into who she really was outside of the person she had to become due to circumstances.  She made it easier for me to put the book down and wander off to do other things instead of wanting to be all in, reading in one sitting.  I simply just missed the connection to her that I felt like I needed.  Even when she accepts that she has to break out of the box she's built around herself I just never felt that she steps all the way out.

I loved the suspense, the side commentary from the antagonist was something I both enjoyed and stumbled over.  The way it was written made me have to focus more on exactly what was being said taking me out of my flow with the book. At the same time it was interesting to have that voice, to get to know the voice before you even knew who the antagonist was.  I loved the twist at the end, which I won't tell you anything about because you would hate me forever, but it works so well and makes me want even more.

I loved the secondary characters and am really looking forward to their stories and getting to know them better.  I think that Piper's story is the one that will catch me and bring me around to the 5 star way of thinking, there is just something there with her that I connected to where I didn't with Ari.

All that said, this is totally a 4 star read for me and I can see why it is a 5 star read for so many. I hope you will pick it up because I am super excited about this new series from Harper and if nothing else, you get Thorn and you get Dwight who is a total arse-cat, but a great addition to the cast, ha. 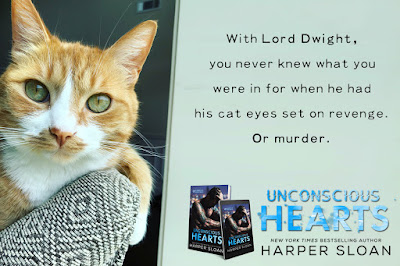 Harper is a NEW YORK TIMES, WALL STREET JOURNAL and USA TODAY bestselling author residing in Georgia with her husband and three daughters. She has a borderline unhealthy obsession with books, hibachi, tattoos and Game of Thrones. When she isn't writing you can almost always find her with a book in hand.